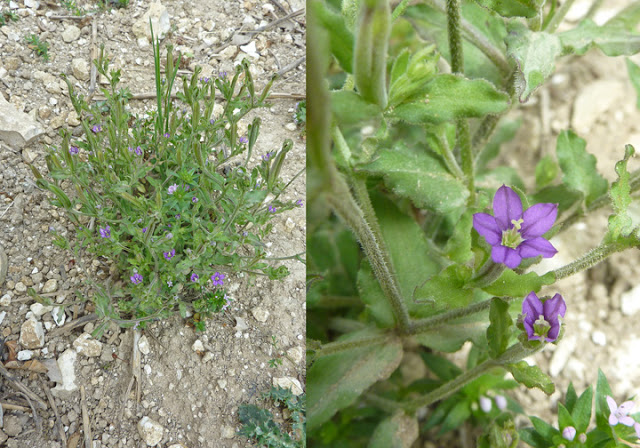 In June I happened to bump into local botanist Peter Wakeham on Park Downs. He told me about the time that he had been spending at Langley Vale Farm, surveying the plants in light of the Woodland Trusts purchase. My ears pricked up at its mention, as I had spent some time birding the area (from public footpaths) and had botanised some of the field margins over the years (seeing such rarities as Night-flowering Catchfly). The WT had opened up access to a great deal of the farm and his offer of a guided tour was eagerly taken up. We met on a swelteringly hot July 1st, which was the start of my visiting the farm on a regular basis. On that initial visit, Peter showed me Narrow-fruited Cornsalad and Cat-mint, both new species for me.

A couple of weeks later I found myself at a bare, chalky field edge on the north-western side of the farm. One of the first species that I spied was a sizeable Venus's Looking-glass, a declining arable plant (above). I wasn't able to look any further at the time, and wasn't carrying a camera, so returned the following day and found this: 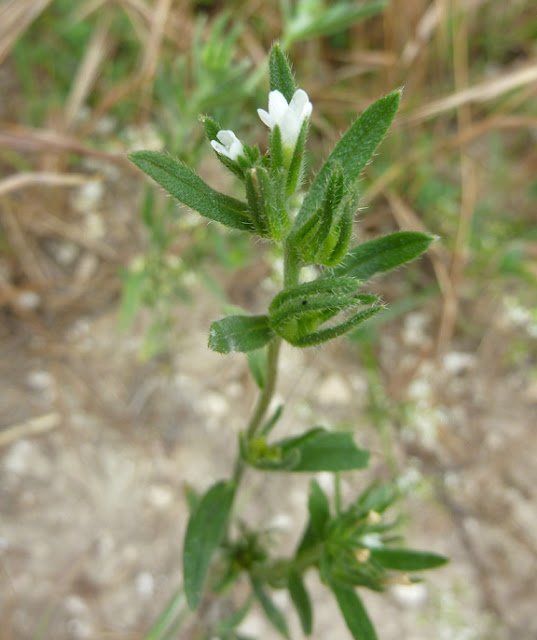 I wasn't able to identify it. It did, however, look familiar - there were faint stirrings in my mind that I had read about it, possibly in the Wildguides Arable Plants book. On my return home, I dug out the literature and was pretty confident that I had found Field (or Corn) Gromwell, another one of those declining arable plants. I sought confirmation and was pleased to receive it from several people. It was the first record in Surrey since 1990. Later that same week, Dennis and Rosie Skinner went along to pay the plant a visit and walked further along the field margin than I had. They found several thousand plants! The farmer has been notified and allowed seed collection to take place. This field is not part of the Woodland Trust purchase. If farming practices stay the same then there is hope that this population will survive.

Not too far away, at Fames Rough, the ploughed strip had helped two national rarities to keep on flowering - Cut-leaved Germander (below top) and Ground Pine (below middle). I also paid Park Downs further visits which resulted in seeing Pale Toadflax (bottom image). 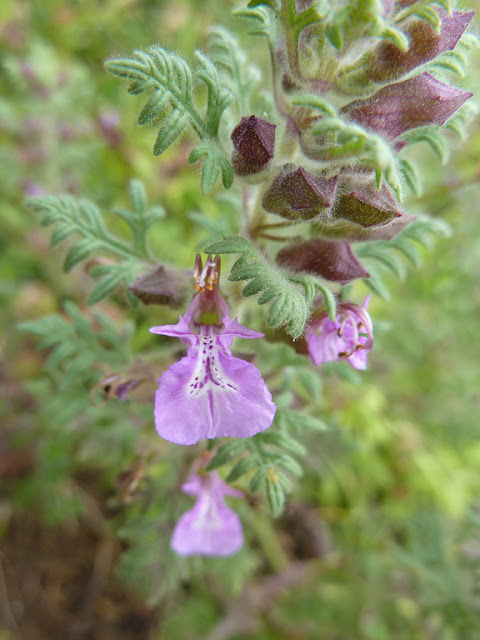 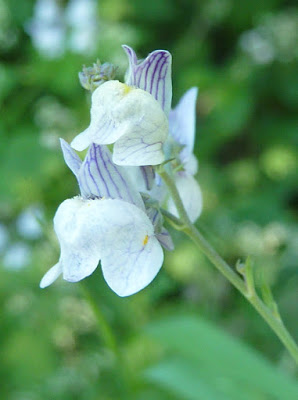 Derek Faulkner said…
Keep 'em coming Steve, they're just as enjoyable second time around. It's all bloody rare birds and dragonflies these days (and of course, eels) and it's no nice to see somebody writing about much maligned wild flowers (you and Greenie).
4 December 2015 at 14:52

Dylan Wrathall said…
Don't be sorry Steve - if plants float your boat, fill your boots old son! If I had as much to write about, as you do, I might also have had to use the whole of December for my review of the year. Eels won't take up too much of mine, or Derek's, time in the next few weeks. All the best - Dyl
4 December 2015 at 18:43

Steve Gale said…
Derek, I increasingly find that my time spent with plants is the most enjoyable.
4 December 2015 at 20:12

Steve Gale said…
In all honesty Dyl, my stringing out of the year's review partly hides me having very little to blog about at the moment. As for eels, well, more power to you in that particular personal quest. I was chuffed for you that you hit the target!
4 December 2015 at 20:15

Gibster said…
Lovely stuff mate. I visited Ranscombe Farm earlier this year and I recognised many of the arable plants there from your bloggings (I callously ticked quite a few, but don't tell that Dylan fella...) Then a few weeks on Scilly allowed me to meet a few more, I'm really into them now and I think NDAB is almost entirely to blame :) Cheers for all this Steve, makes very pleasant reading.
5 December 2015 at 09:53

Steve Gale said…
Seth, I'm flattered to hear that mate. Plants do it for me, they really do. I want to target a few 'missing' species next year, so one of my jobs this winter is to plan for them. Hopefully see you soon!
5 December 2015 at 10:55

Unknown said…
They are gorgeous, Steve. I'm really excited with your idea to target a few missing species next year. That's great. I hope to see some photos too.
Claudia commented also at essaytoday.net
10 December 2015 at 08:10