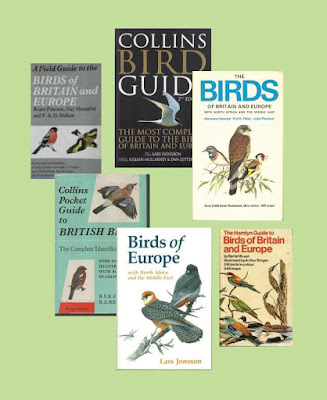 I'm not old enough to remember the effect that the publication of A Field Guide to the Birds of Britain and Europe had on the ornithological community in 1954. Written by Roger Tory Peterson, Guy Montfort and Phil Hollom, this took the template from the successful American field guide written by the first mentioned author. Gone were the flowery heroic portraits of birds (such as those by Archibald Thorburn) and in came illustrations whose sole purpose was to educate the reader in the ways of how to identify the species. The text was heavily biased towards this new art of field identification, and the plates helped the reader even further by the use of clearly marked key features - there was no second guessing going on here!

This was but the third bird field guide that I owned. I bought it out of a sense of duty towards its perceived worthiness (as much as I also purchased Collins Pocket Guide to British Birds by Richard Fitter and Richard Richardson). These guides, although historically important and ground breaking in their time, were not the publications that inspired and educated me in my early birding days. That accolade goes to two other titles - first up was The Hamlyn Guide to Birds of Britain and Europe by Bertel Bruun and illustrated by Arthur Singer. The chances are that, when first looking for a field guide, this was the one that was available in the bookshop that I visited. But it was exactly what I wanted. Each richly coloured plate faced the relevant text and distribution map (which the earlier guides had failed to do). I spent many hours immersed in this book, turning from plate to plate, fantasising about seeing some of the jewels on offer. To look at it now transports me straight back to the summer of 1974, and one particular August morning in the New Forest when I saw my first Green Woodpecker. The illustration in the book had become real life, and I couldn't quite believe it.

Not long afterwards, another birdwatcher that I knew showed me a copy of The Birds of Britain and Europe with North Africa and the Middle East by Hermann Heinzel, Richard Fitter and John Parslow. The added attraction of this book was the inclusion of regions outside of Europe, so there were plenty of new species covered, some of which I had never heard of. This became my field guide of choice, although the Hamlyn Guide was never surpassed in the emotional stakes. Both of them became dog-eared, mud-caked and torn over several years of abuse in the field. Sadly, at some misguided moment in later life, they were thrown away because of it.

And so the 1970s became the 1980s that soon passed into the 1990s. What field guides that came along - and many certainly did - failed to register much with me. But in 1992 that all changed when Birds of Europe with North Africa and the Middle East was published by Helm. The author and artist, a Swede called Lars Jonsson, redefined the genre. I had already in my possession five slim tomes by him, not really field guides, more 'birds of habitat' guides, so I was already aware of his prowess with the paintbrush. What we had here was an amalgamation of these books, with hundreds of extra illustrations and species and updated text. To use the term illustration was not really doing them justice - they were works of art that managed to combine emotion with function - the best of both worlds. Gulls were shown in differing ages, possibly a first. The plate of skuas (which I'm looking at now) almost fly off of the page, full of menace. It became the 'go to' publication.

And that's the way it stayed until 1999 when the Collins Bird Guide came along and blasted everything else out of the water. A long time in the making, the text was written by Lars Svensson and Peter Grant. This was a more thorough treatment that we had been used to, getting to the nub of the many problems in putting the correct name to a species. Not surprising as it was written by the foremost field ornithologists of the time. So far, so good. But what can you say about the illustrations by Dan Zetterstrom and Killian Mullarney? Well, they out-Jonssoned Jonsson! Every plate is more than a representation of the species. We are treated to a stunning array of angles, ages and postures, plus tiny vignettes than convey the jizz of a bird with just a couple of brush stokes. You can spend days lost in this book, weeks wandering around the plates. I take it everywhere with me. When the second edition came out I just had to have it, as so much had moved on in the world of identification and taxonomy. And will do the same if there is a third edition...

Will there be another game-changing field guide? I have my doubts. The use of phones and tablets in the field will surely mean that any future guides will be aimed at video, sound-recording and image recognition. I have an app on my phone that can recognise almost any music that I play to it - how long before I can hold my phone up to a bird song or call and have it instantly identified, or capture a bird on a camera and be told what it is? In some ways I hope that day never comes, because that would then remove the skills needed to be able to identify what is before you. And where would the fun be in that?

Derek Faulkner said…
I still think that the 1954 Field Guide takes some beating, although the colour reproductions in later reprints were a bit off. One book that you haven't mentioned which I've always thought was pretty special, was The Macmillan Field Guide to Bird Identification, fantastic for those birds that look very similar. I can't really see how any new book can come up with anything new, there's only so many ways that you can portray a bird.
As for modern methods, well I guess they're hard for some of us oldies to accept as necessary, we've already got people wandering around with bird song lures on phones, etc., but time moves on.
26 April 2016 at 10:05

Lucy @ A Natural Interlude said…
It wasn’t until about 10 years ago that I began to discover my real passions in life, birding and the natural world being one of them. I jumped straight in to the Collins guide and had no idea of its ancestry. Thoroughly enjoyed your recollections, Steve! Particularly loved the line, “[t]he illustration in the book had become real life, and I couldn't quite believe it”. You know you’re alive when you experience that spontaneous sense of recognition and wonder!
26 April 2016 at 10:54

laurence.d said…
Hi Steve, this got me thinking, and I managed to dig out my copy of the Collins THE BIRDS OF BRITAIN AND EUROPE,WITH AFRICA AND THE MIDDLE EAST ,cost £1.50 in 1972 !,I don,t have any of the others though.

Jonathan Lethbridge said…
when I got mugged a way back when I was equally upset about losing my Collins (mk 1) as I was my bins. I had backup optics but no second copy of the book. This was rectified the following day!
26 April 2016 at 21:16

Jonathan Lethbridge said…
Hienzel Fitter and Parslow was my first field guide too. Until the Collins came along it was unbeatable.
29 April 2016 at 21:22