April 18, 2016
I've just come back from a few days at Dungeness, my first visit since the lengthy late-autumn sojourn. A cool airstream that emanated from colder places to the north and west of the UK are not conducive to Mediterranean over-shoots, but a few migrants did brave the conditions. As ever, the reserve's resident flagship species were readily on view.  Highlights were Black-necked Grebe, Great White Egret, Bittern, Tundra Bean Goose, Whimbrel, Iceland Gull, Little Gull, Mediterranean Gull, Black Tern, Ring Ouzel, Reed Warbler, Lesser Whitethroat, Bearded Tit and Raven.

Still on the subject of 'flying things', I was keen to catch up with the very rare and localised Grey-backed Mining Bee (Andrena vaga). Since 2010 it has become established in Hampshire and Kent, with a colony being discovered on the RSPB reserve at Dungeness by David Walker.  For some reason (bad timing, woeful neglect) I had failed to see them - until now. My first two visits of this trip to the colony coincided with cold, overcast and wet conditions - I knew I was on a hiding to nothing. But then yesterday things looked promising - the sun came out, and away from the cold wind it was quite warm - and, most importantly, the bees agreed! The RSPB are rightfully proud of this colony and advertise its presence (on a steep sandy bank as you approach Dennis's Hide). All they ask is that you do not go crawling up the bank - the bees will come down to you with patience. I managed to get a few passable images that are below. 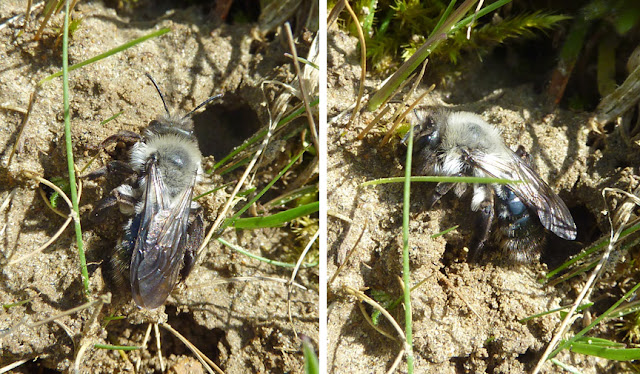 Back at the observatory, with the local expertise of David Walker, I was able to also see Andrena clarkella, Andrena barbilalris and Andrena flavipes. My stumble down the pan-listing league table has been partially halted!
Andrena vaga Dungeness Grey-backed Mining Bee

Steve Gale said…
There are many species of Mining Bee Simon, bot those Tawnies are very smart, aren't they.
19 April 2016 at 11:09