April 01, 2016
I've just come back from a relatively lengthy spell of birding over at Canons Farm. As I left the place I tweeted out the following:

After a six hour stint, I'm off. There's only so much empty sky a man can take.

This comment was made due to a fair-sized dollop of disappointment - what with a southerly airflow, and plenty of migrants having been recorded elsewhere during the week, I really thought that we would be in with a chance of picking up some stuff. At least a Swallow, maybe a Willow Warbler and even a fly-through Marsh Harrier or Osprey. But none of these materialised (the last two species mentioned unsurprisingly). There were four of us out looking as well, so the patch was being well covered.

Empty sky? Did I really mean that? Looking at my notebook, that really was harsh. 10+ Common Buzzard. 1 Peregrine. 2 Greylag Geese (maybe not 'patch gold', but certainly 'patch bronze'), a smart male Brambling, a female Stonechat, a flock of 80+ Linnet, half a dozen Chiffchaff, and up to six of these... 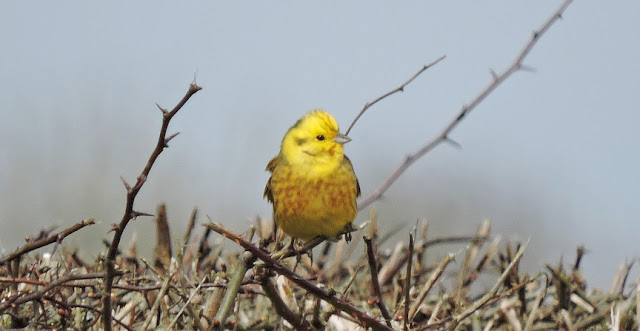 We still get Yellowhammers. Not many places around the edge of London do. We had up to 50+ during the winter and maybe 2-3 pairs will breed. So, empty sky? Hardly.
Canons Farm Yellowhammer

Derek Faulkner said…
Stop moaning, I'd love to have Yellowhammers, we lost ours on Sheppey about 20 yrs ago. This Spring Migrant thing is the most frustrating time of the year, I've been our all day sometimes and seen nothing and had a friend pop out to the same place for half and hour and get them.
Saying that, I had a female Wheatear this morning.
1 April 2016 at 18:07

Steve Gale said…
Not moaning Derek, far from it - celebrating our Yellowhammers if anything.
1 April 2016 at 18:20

Unknown said…
I'd take a Yellowhammer for the local canal. Had one strong possible on a distant telephone wire a good few years ago but not good enough to 'have it'. That is a pleasure yet to come (I hope).
1 April 2016 at 21:59

Steve Gale said…
They really are fickle in their distribution. I'm guilty of taking them for granted sometimes.
2 April 2016 at 20:08