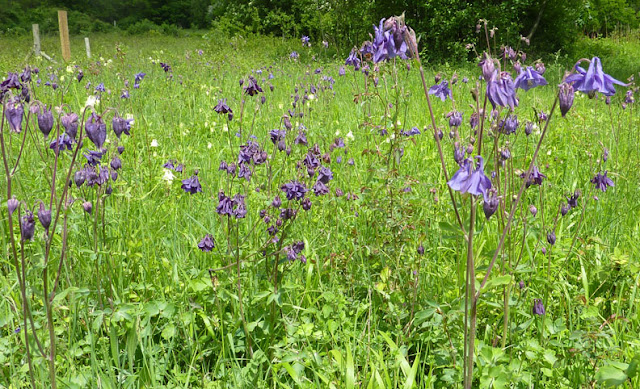 Columbine (Aquilegia vulgaris) is a native plant that I can easily find growing on the chalky soils surrounding Banstead. This morning's visit to Park Downs was improved no end by the presence of this species, mostly individuals with blue-mauve flowers, but also some showing white and a very few a pale pink. It is a common plant of gardens, the cultivated varieties exhibiting straighter spurs (apparently) and these can be found spilling out onto pavements and grass verges across the country. My downland plants are truly wild, although they do exhibit a mix of colour as described above. 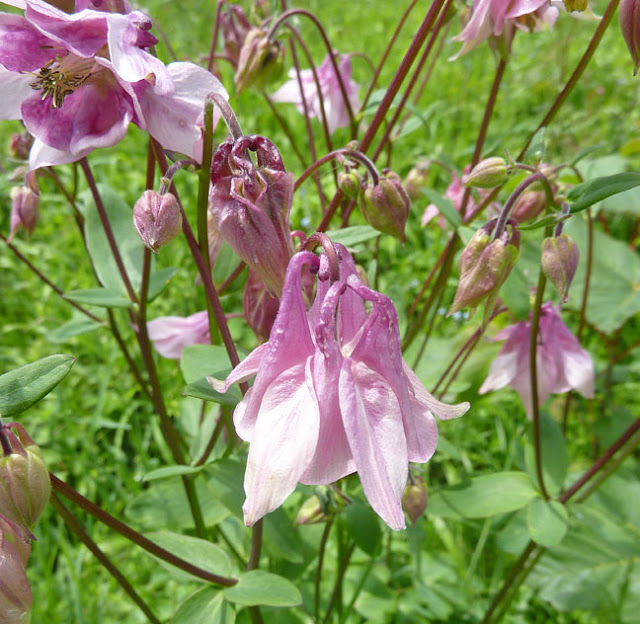 It is an elegant and graceful thing, all curves and swirls mounted on a thin natural fretwork. It is as if the species were the creation of the arts and crafts movement, or maybe from the drawing board of Charles Rennie Mackintosh or William Morris. It has the stamp of Victoriana all over it. 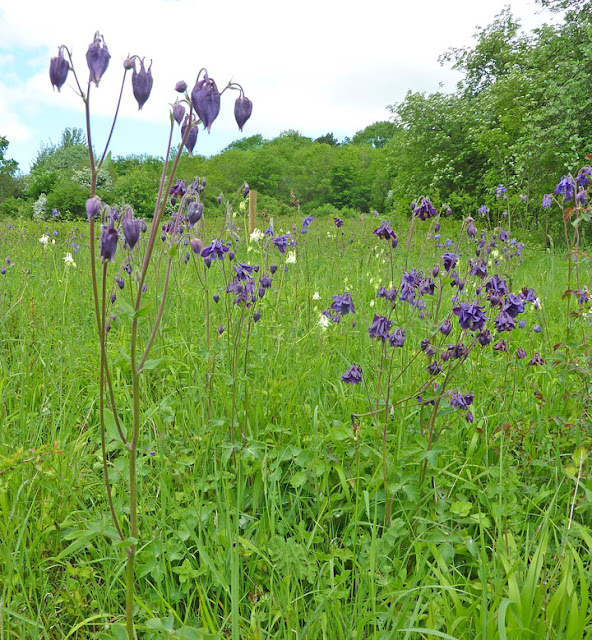 The grassland was starting to smell like summer - the whiff of thyme regularly catching me off guard. Salad Burnet and Germander Speedwell are bossing the proceedings, but there is the unmistakable feeling that spring is beginning to give way to summer, a passing of the season's baton if you will. The butterflies were celebrating this seasonal build-up, with Common Blues and Small Heaths most numerous, although the smaller numbers of Dingy Skippers really caught my attention. The flowers of high summer are currently like resting actors, waiting in the wings to be called on stage - they are there, but keeping out of the way, either in a non-descript vegetative state or still hidden underground. It is a time of the year heavy with expectancy. 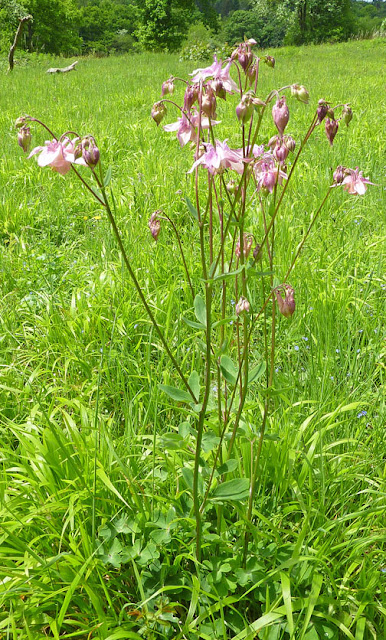 Wonderful, it's so hard to believe that there are actually places left that aren't ploughed, cut or grazed to death.

Your descriptions conjure up perfectly the sensations/impressions that this plant creates, Steve. We came across some at Albury Nowers last Friday and having spent the morning straining our eyes to scrutinise tiny, low-growing chalk plants, the display of Aquilegia was bold and oh so William Morris!
You reminded me, it’s the Marjoram that I keep catching the scent of at the moment…delicious.

It is a beautiful and elegant plant!

Pixelate the scene and you have a Klimdt too?

Fortunately Derek I am surrounded by them.

Thank you Lucy. You are correct, it almost looks out of place among the dwarf vegetation.

Do you see it near you Simon?

Ooh I like it Andrew, maybe with a bit of gold thrown in and some geometric patterning behind.

Hi Steve, I have been away and only just caught up with this. I am sorry to disabuse you but I am afraid that these plants aren't wild on Park Downs. They are the distant progeny of a few double-flowered palnts that appeared about ten years ago that have reverted back to singles. You can still find doubles there. They are increasing each year even thiough I try to pull as many as I can when they are in flower!!
John

Thanks for the info John, that's a shame.