Back in December, wildlife author and blogger Jon Dunn (above) asked me if I could help him out with a few orchid sites this summer. He was keen to see both Bird's-nest Orchid and White Helleborine - both species that 'my' part of the North Downs is blessed with. I was only too pleased to help him out, especially as it was to be research towards his new book project. Today we finally met, after being 'virtual' friends for a couple of years - this social media is a strange beast when you really think about it. Two strangers, meeting for the first time in a car park, who know that they have a lot in common, but have never spoken or clapped eyes on each other! Luckily we both hit it off very quickly and the day was an absolute pleasure.

I had set up an itinerary that took in a number of Bird's-nest Orchid sites (in the Box Hill - Mickleham - Ranmore area), several of which also boasted White Helleborine. I also included the southern slope of Box Hill where a sizeable Man Orchid colony is found.

The timing of the Bird's-nests varied greatly. The Mickleham and Box Hill populations that I know were still only just emerging, but had grown noticably since my visit on Tuesday. The same could be said of the Juniper Bottom White Helleborines, that had only a few in bud, although one plant had a fairly advanced flower.

The Box Hill Man Orchids (left) were a delight. Up to 125 spikes were on show, some of them quite tall, although others were only just emerging. Once we got our eye in spike after spike emerged ahead of us, a single here, a group of a dozen there. We didn't cover the whole slope but there must be more to find. Nearby, in a brief moment of sunny weather, a pristine Adonis Blue butterfly stole us away from the plants, the first that Jon (now a resident of Shetland) had seen for many a year. He should have obtained some frame fillers, as the insect was quite sluggish and stayed put upon a flowerhead for several minutes.

Ranmore was where the main show took place. We found 150+ White Helleborines, mostly a way off from flowering, although one or two were doing so. The Bird's-nest Orchids were spectacular. For more detail, including information about one particular special group, I'm afraid you will have to wait until Jon's book comes out in 2018! I can divulge that we came across 250+ fresh spikes in varying stages. Some show indeed. 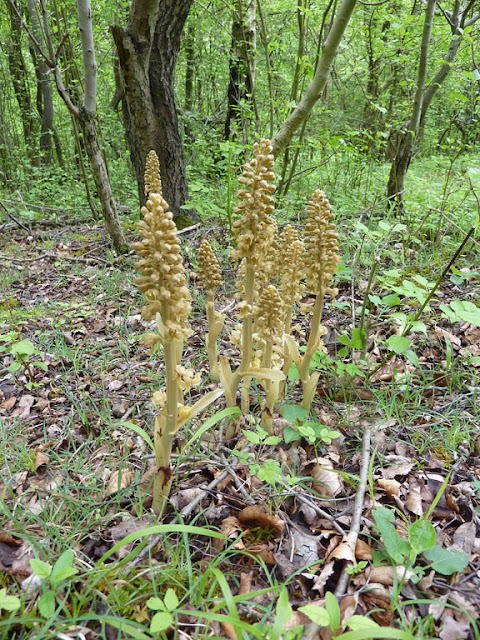 I had one last surprise for Jon. In a previous correspondence he had admitted to an admiration of the work of artist and lepidopterist Frederick William Frohawk (1861-1946). It just so happens that he is buried in Headley churchyard, very close to our orchid sites. I took Jon along to pay respects to his hero. Frohawk's grave is marked by a carved wooden cross, which has a Camberwell Beauty as its centrepiece. As we stood by the grave the church bells sounded. And as we left, Jon patted the cross in a show of appreciation towards the great man... 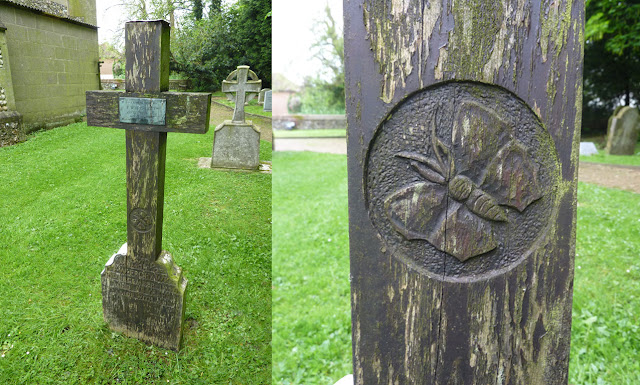