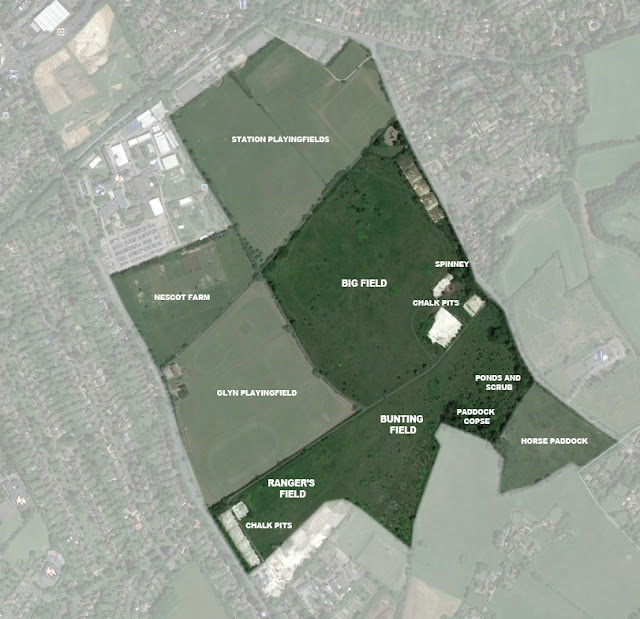 Priest Hill forms part of the dip slope of the North Downs as it makes its chalky way down to meet the clay of the Thames Basin. It used to be a place of agriculture, with cereal crops and dairy cows gracing the high, open ground. In the 1950s the land was transformed into an enormous area of playing fields, with schools from London being bussed out to use the amenities, but by the 1980s it mostly fell out of use, and nature started to reclaim it. Four years ago Surrey County Council sold a portion of the land off for development and gifted 33 hectares of it to the Surrey Wildlife Trust.

In all honesty, there is little to immediately suggest that this area is worthy of reserve status, although it does hold breeding Skylarks and Meadow Pipits, and has a good colony of Brown Hairsteak. It is largely botanically impoverished. However, management has already helped to encourage nearby wildlife to colonise. Large areas of tarmac and rubble have been cleared where tennis courts and changing rooms once stood, the ground here being scraped back to the bare chalk. Green hay from nearby Howell Hill has been spread out and such species as Kidney Vetch has appeared, along with the first Small Blue butterflies. The fencing of fields (and the accompanying grazing from Belted Galloway cattle) has produced an undisturbed and sympathetic grassland for the continued breeding of Skylarks.

Selective control (and in places removal) of scrub has provided 'wildlife corridors' of hedges and scrubby strips, with the open spaces punctuated by a few mature trees. A copse and a spinney, plus a few small ponds, add to the reserves charm, which in itself sits surrounded by more green space - paddocks, playing fields and a small college farm.

I first visited the site 20 years ago, when it was a rubbish-strewn wasteland, heavily scrubbed-up but full of strange plants that sprang up from the rubble and mounds of dumped earth. When the clearing up process began and the reserve was being created, I was invited to help out with the monitoring of the birds by the then ranger, Rachael Thornley and the first breeding bird survey was carried out in 2015. My visits have increased greatly since last November and the rewards have been pleasantly surprising. Apart from a couple of unexpected records (Cattle Egret in December and a Jack Snipe at the beginning of this month), wintering flocks of Reed Buntings were discovered, along with a constant presence of Stonechats. A Red Kite passage has been obvious this Spring (highest day count of four), Chiffchaffs and Meadow Pipits are moving through and Tawny and Little Owls are resident on site. Last weekend a Peregrine was on the Glyn playing field, feasting on a recently dispatched pigeon. The potential is high.

I've cobbled together a map (above), with the dark-green areas indicating the reserve, and the mid-green extensions showing my own Priest Hill recording area - after all, why neglect the paying fields? None of the place names are official, they are just what I use for my own reference. Although the south-eastern section of the reserve is largely private, the public can see most of it via a network of footpaths that allow the fields to be scanned with ease, with much of the scrub and hedgerow being accessible. I am convinced that regular observation will reveal more surprises - but, as is the case with all 'dry' inland sites, you will need to put in the hours to get the rewards!
Priest Hil

Derek Faulkner said…
It's really great when a site gets proper management and results reward that management.

Gibster said…
I seem to recall thinking that the chalk scrapings by the ranger's building were too close to the road and would be cast into shade by trees. Has this been the case or am I remembering the layout all wrong? Been a while since I was last there.
29 March 2017 at 10:06

Steve Gale said…
Your memory serves you right Seth, the chalk scrapings with the Kidney Vetch and Small Blues are on the other side of the reserve
29 March 2017 at 12:22