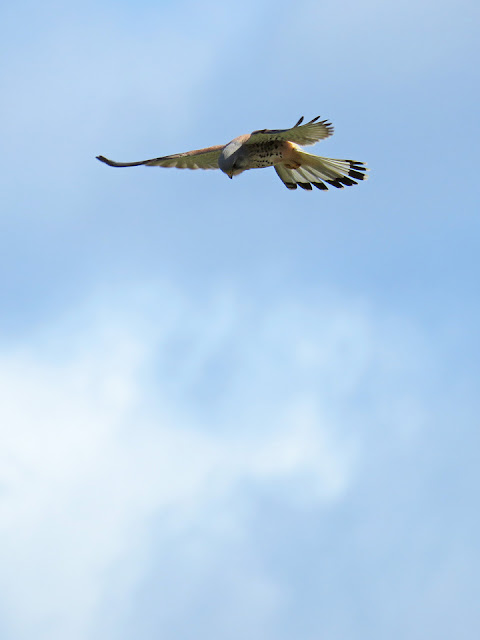 The photograph above, of a hovering male Kestrel, was taken this morning at Priest Hill. It was only after I returned home that I became aware that today has been designated as 'World Poetry Day' and, being a surprisingly cultured oaf, immediately thought that this image would be apt for a post. The Windhover was written by Gerard Manley Hopkins, that clerical poet who celebrated the natural world in many of his writings. It was a poem that I came across at school, when studying for my English Literature O-level, where I was lucky enough to be taught by a fine teacher, one Mr McTiffin. He instilled in me a love for the written word that has remained to this very day. So, for an appreciation of the Kestrel, over to you Gerard...


I caught this morning morning's minion, kingdom
of daylight's dauphin, dapple-dawn-drawn Falcon, in
his riding
Of the rolling level underneath him steady air, and striding
High there, how he rung upon the rein of a wimpling wing
In his ecstasy! then off, off forth on swing,
As a skate's heel sweeps smooth on a bow-bend: the hurl
and gliding
Rebuffed the big wind. My heart in hiding
Stirred for a bird, - the achieve of, the mastery of the thing!
Brute beauty and valour and act, oh, air, pride, plume, here
Buckle! AND the fire that breaks from thee then, a billion
Times told lovelier, more dangerous, O my chevalier!
No wonder of it: shèer plòd makes plough down sillion
Shine, and blue-bleak embers, ah my dear,
Fall, gall themselves, and gash gold vermilion.
at March 21, 2017

Words to leave you speechless! Beautiful photo too, Steve. Hopkins was part of my schooling too. He became more personal when, as a teenager, I was ill for some months, and the local vicar came to visit (small village!). His parting gift was a copy of Hopkins' poems. I appreciate them all the more now.

I remember Mr McTiffin! A brilliant teacher and my form teacher for a year, I always credited him for the decent O level grades that I got. Nice photo as well

Lovely to hear from you Lucy. Hope you're keeping well.

He was a fantastic teacher Stephen, and one of the few who had absolute control over a class.