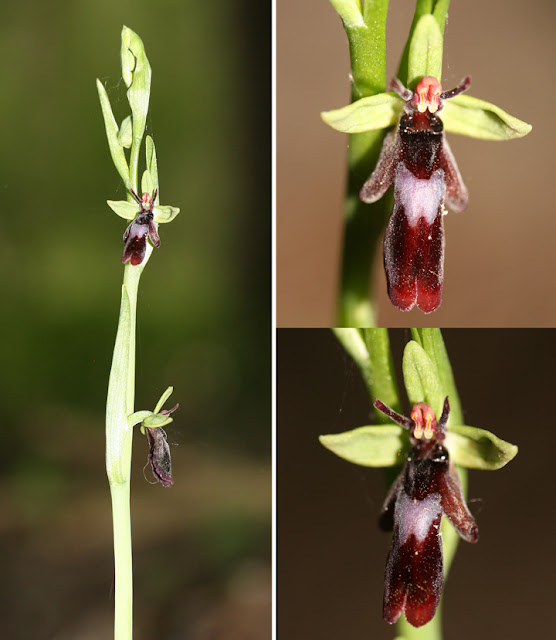 May 4th? It feels more like March 4th, all low scudding grey clouds with a definite chill to the air. I did attempt a bit of birding, but apart from a handful of 'scratchy' Whitethroats it was all quite poor. However, I had something up my sleeve just in case the birds were being difficult - a local colony of Fly Orchids. In the Banstead area it is not a common plant by any means. I have been told of a 'sizeable' colony that I have searched for, but yet to find (I know the wood, but it's quite large), so I stuck with my regular patch which are in Chipstead Bottom, tucked away under a Yew tree. I counted 23 spikes (the most that I've seen here), and two of them had started to flower.
at May 04, 2017

Orchids are quite amazing in how they seem to mimic certain things. Lovely pictures.

Now that is an enviable thrill, being able to look at such a wonderful plant. Here on Sheppey we don't have such wonders, not even a Common Spotted.

Thanks David, I never tire of them.

Not as chewy though...

That does surprise me Derek