Invasion of the coccothraustes under a very odd sky 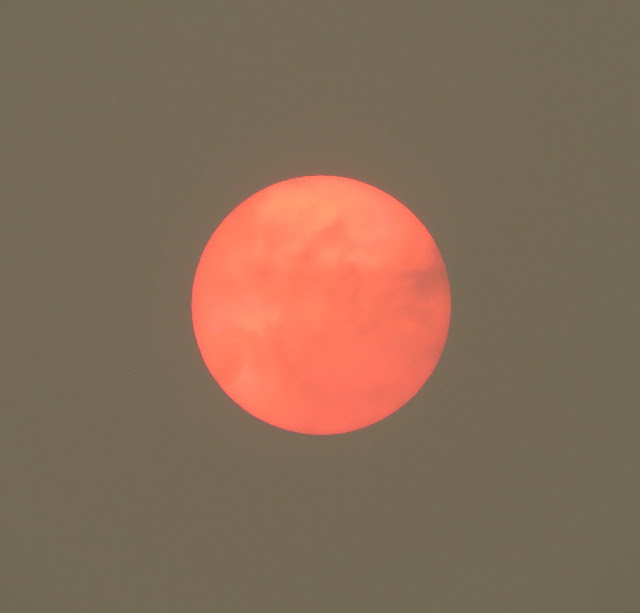 And still they come, delighting those lucky enough to be standing underneath them - Hawfinches that is. This autumn's 'invasion' continues on a broad front that is giving observers the opportunity to see this species in places where they normally do not occur - like my garden for instance. I took up my position for a spot of viz-migging at about 07.30hrs and stuck at it for almost four hours. Although much quieter than yesterday, the main target did arrive, with a flock of four Hawfinch over low, heading east, at 07.50hrs, and then a single five minutes later that circled a couple of times before it too departed eastwards. Calls were heard on both occasions, a suprisingly thin sound from such a beefy bird. I was more than a little pleased.

Since I first looked at a bird book over forty years ago, the Hawfinch has always intrigued me, from its striking appearance down to its secretive nature. Even when you know that they are present in a wood they can be difficult to pin down. The 100+ flock at Juniper Bottom in early 2013 had a habit of just materialising in front of you and just as suddenly melting away. We did not know where they spent the afternoons or where they roosted. You've got to admire such aloofness!

If you are into such things as keeping a back garden/patch list, and Coccothraustes coccothraustes is not yet on it, this might just be your best opportunity to add it for the foreseeable future.

At lunchtime the wind picked up and the sunlight took on a distinct vagueness, as if the rays were being filtered through dust - which indeed they were! There are two suggested sources - you can take your pick between Saharan Dust or smoke from the wild fires on the Iberian peninsula. It then all turned a bit Bladerunner, the sun turned dull blood-orange, the sky become an approximation of yellow-grey sludgy soup and the light dimmed to the point where car headlights were needed to be turned on. All very surreal.

Once in a while the weather brings us strange days Neil