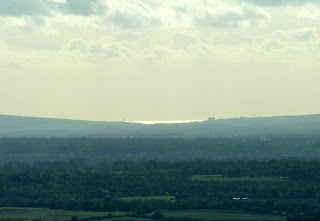 I was going to start this post by mentioning that us birders in land-locked Surrey cannot obviously indulge in the ornithological pastime of sea watching, but then remembered that this is not strictly true - I took the photograph above from the top of Leith Hill a few years ago that clearly shows the sea, believed to be at Shoreham. It would, however, take a fantastic telescope, plenty of imagination and an awful lot of fabrication to come up with any meaningful observations...

Instead, us inlanders can use the sky. As a surrogate sea this is quite a good compromise. The same rules apply - find a clear view, take up position and wait. The birds come to you. There is the need for good flight identification (like the sea), it can be weather dependent (again, like the sea) and can throw up the unexpected. In addition - and unlike the sea - bird calls are an important component of the birder's armoury.

Sky watching has the advantage of being able to be participated in from almost anywhere (although I've always found the cupboard-under-the-stairs to be pretty useless). There are hot spots (hill tops, gaps in hills, river valleys) with my closest site to home being at Canons Farm, which has big skies and relative height. We also believe that the nearby A217 acts as a navigational aid to birds, as we have seen flocks of birds (including patch-scarce waders and ducks) flying along its line. You can relive a couple of my memorable sky watches from the Farm here and here.

This morning it was quiet, but the Farm (and sky watching) always has something to offer, with six Red Kites, all singles, heading between south and west.
Canons Farm Red Kite Sky watching

Derek Faulkner said…
An amusing and different perspective on birdwatching but birdwatching all the same. Funnily enough, as you know, I live on Sheppey with the sea all round me and yet never seawatch, finding it the most boring form of birdwatching.
11 May 2018 at 08:36

Steve Gale said…
Derek - that's a shame - it really can be exhilarating.