Of Foresters, orchids and shieldbugs 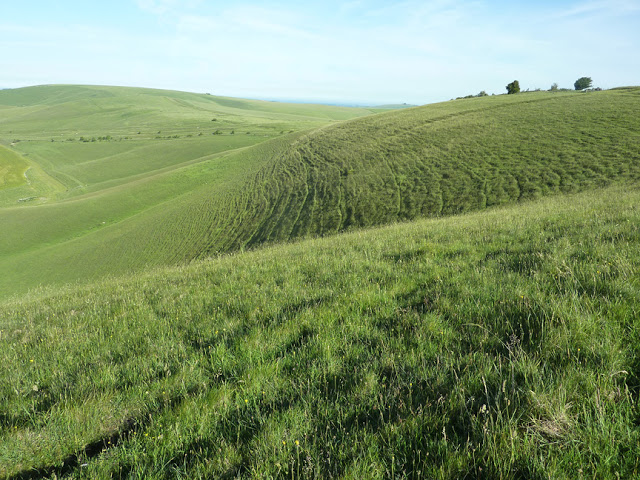 The countdown of my most enjoyable natural events of the past five years continues:

5. Pewsey chalk downland
Up until the late 19th-century, my family roots were firmly established in the Vale of Pewsey, Wiltshire. The family tree that my father pulled together shows a line of simple folk - pot men, farm hands - all born, married and buried within the parishes of All Cannings and Alton Priors. At the end of the 1980s my Father returned, and it was then that I got a chance to reconnect with my forebears. I liked what I found. Fanciful or not, I found a connection. It also happens to be a wonderful place for the naturalist. Pewsey Downs (above) is a piece of prime chalk downland that boasts a great species assemblage. On Wednesday 14th June 2017 I spent a warm, but breezy day wandering the slopes.

I had several major targets - two species of moth (Wood Tiger and Cistus Forester) and the localised Down Shieldbug (Canthophorus impressus). But, targets or not, it is the chalk downland flora that always steals the show. There were literally hundreds of thousands of orchids throughout the site, mostly Common Spotted but I also recorded Lesser Butterfly, Bee, Chalk Fragrant, Pyramidal and Frog (below). I have seen Burnt here, but today was possibly too early as they tend to flower in July on Pewsey Downs. 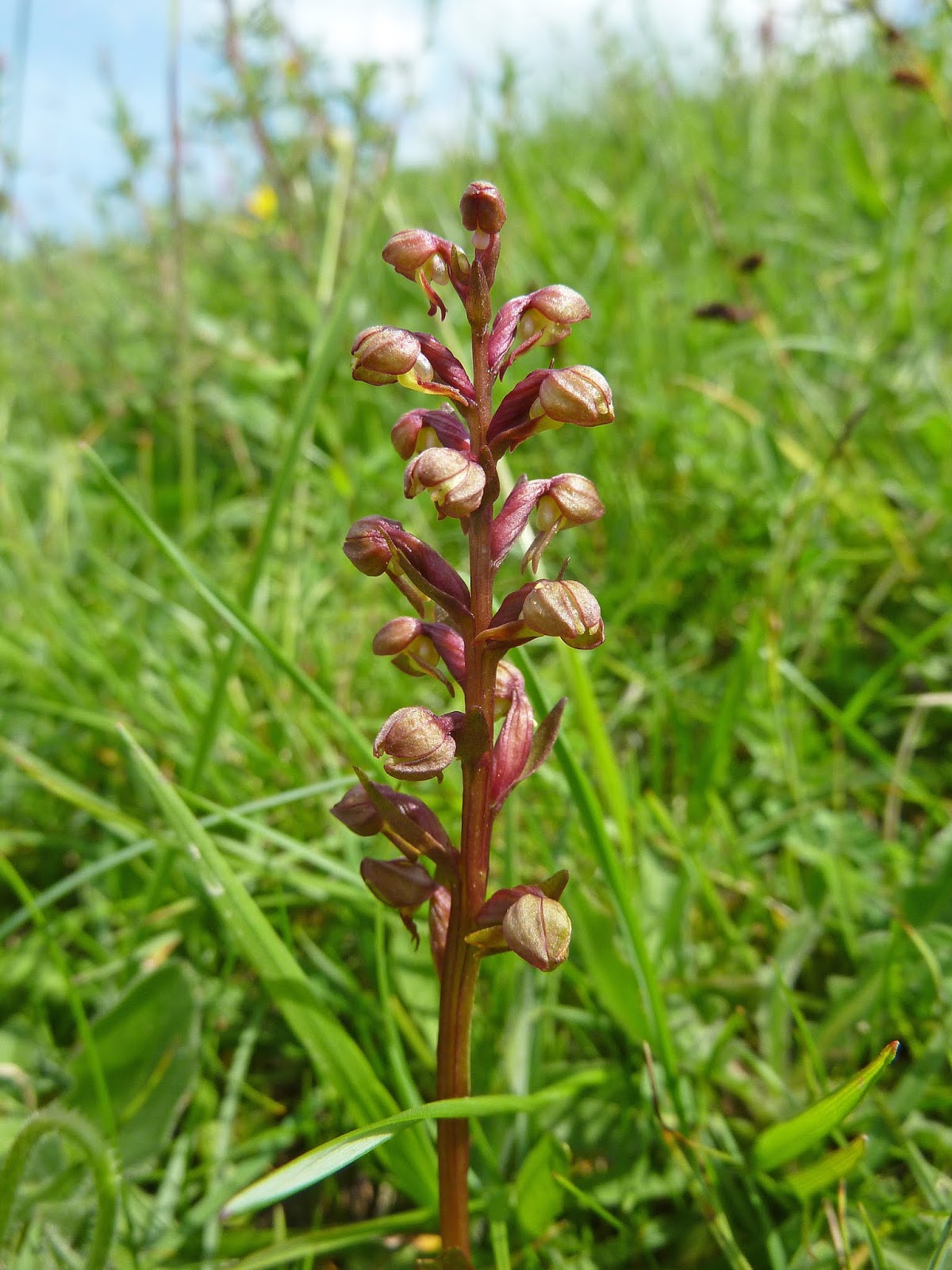 The breeze started to pick up as the morning wore on, and this was keeping the butterflies mostly hidden (the site holds Marsh Fritillary and Adonis Blue). The search for my day-flying moth targets was not going according to plan either, but after three hours I came across a section of hillside that held several Cistus Forester (below). By the end of the afternoon I had seen a minimum of 20. 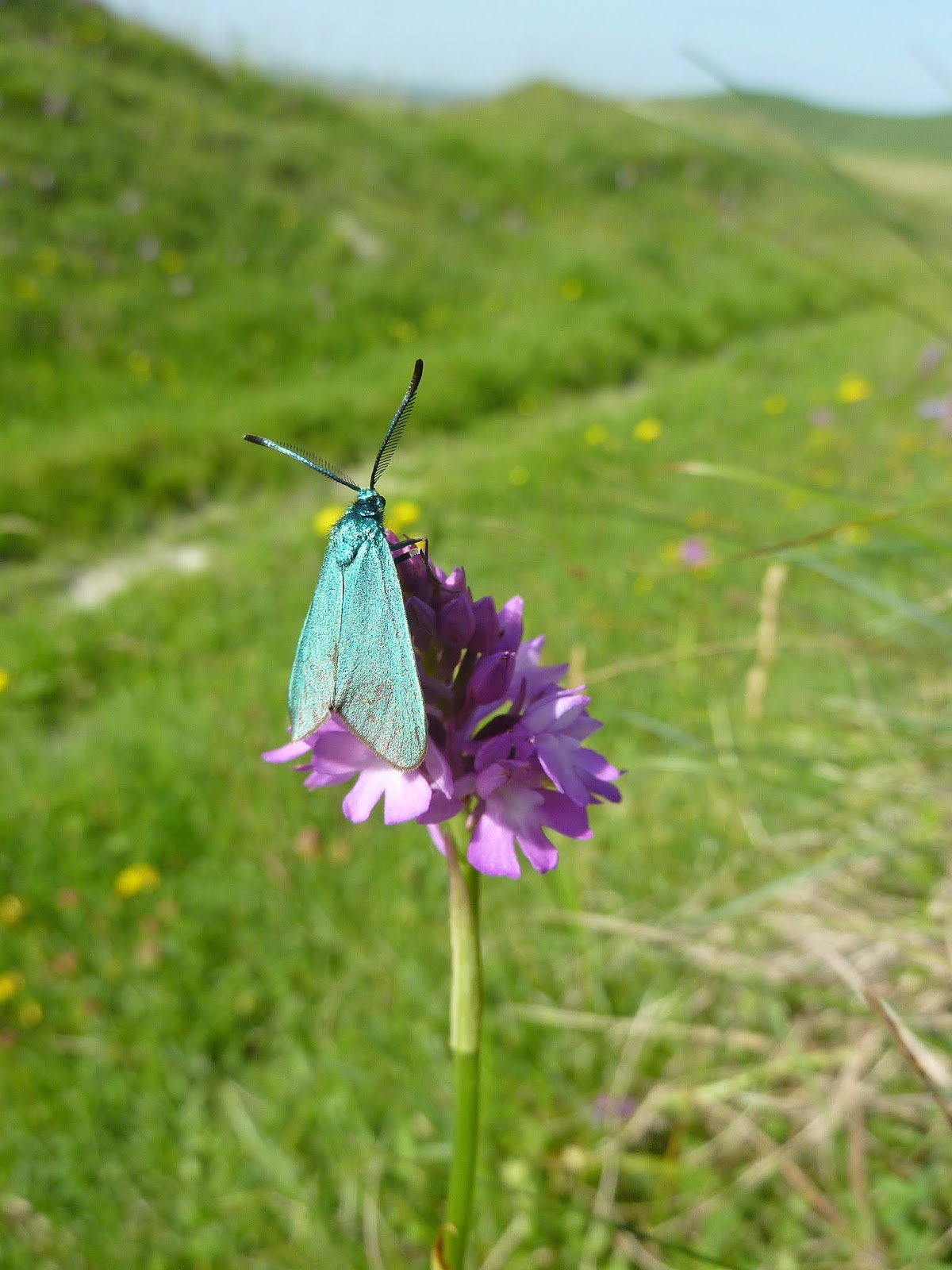 The presence of Down Shieldbug on site is because its food plant -  Bastard-toadflax - can be found quite easily here. I came across six 'mats' of the plant and found the shieldbug on two of them (below). As the afternoon wore on the hills started to fill with kite-surfers. The car-park was now jammed and the wind was now gusting force 5-6. Time to go. I had spent a magical day on the downs, the natural wonders on show had been in tandem with my perceived spiritual connection. I would need to return to hunt down the elusive Wood Tiger, not that I needed an excuse to do so. 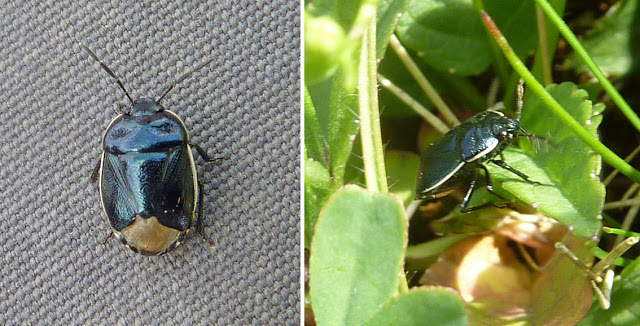 As much as it had been a special day for me, it will be one that I think back on with sadness. I had left home, in darkness, so that I could arrive on the downs soon after first light. The radio in the car was relaying news about the dreadful, ongoing fire at Grenfell Tower in west London. As you drive over the race course at Epsom you get a bird's-eye view of the city, particularly out to the west. I looked over in that direction and could see, in the distance, the fiery glow coming from that fated tower block. It was a shocking and sobering sight.
at November 26, 2019

You really do publish some beautifully illustrated and well written blogs.

Thank you Derek, that is appreciated.

That same day Bev and I were sat, at a bar, in some soul-less, non-descript, resort on Tenerife watching the unfolding horror of the Grenfell Tower disaster. I too had enjoyed some fantastic wildlife encounters prior to this news story being live streamed. A very poignant reminder of how precious life is - live for the moment as we have no idea what's around the corner for any of us? As Derek says - nice post mate.

A joy as always. I was in Speyside staying next door to an RSPB warden. So I got grid references for large heath, northern borwn argus, white faced darter, Summer ladies' tress, twinflower and small white orchid. But the time is also remembred for Grenfell. Friends living on the estate from the local church worked tirelessly in their trauma.

Thanks for the prompt to go back to Pewsey. I visited in May and a hovering kestrel below me, brief glimpse of marsh fritillary, sea mouse-ear and early gentian were the highlights then.

Thanks Dyl, and yes, a poignant reminder indeed.

Plenty of good work has been done by that community since the fire Tim. I salute them all.

Thank you for such positive feedback - always welcome!