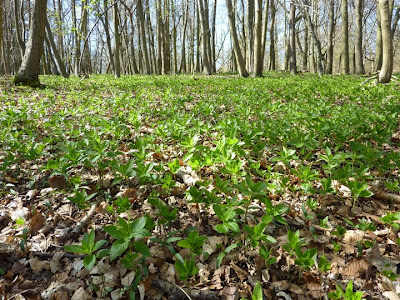 Dog's Mercury on a Surrey woodland floor wins my 'Best photograph of the year taken by Steve Gale' award, awarded to me by me after me voting for it.
2010 review? In November? Yes, I'm afraid so. Every other blogger will be packaging up a compendium of highlights to grip the rest of us off with, so I thought that I'd get in a bit earlier. And I promise not to grip you off...
This was the year in which I got sick at tired of blogging, and, after two years and 500+ posts, killed my site off. Totally. Wiped everything. By August I found that my fingers were once again twitching at the computer keyboard, so 'yet again' formed 'North Downs and Beyond.' Oh you lucky people...
In my quest to be the UK's top lister at compiling lists, I created yet another - my 'North-east Surrey uber patch'. This is basically all of my local patches strung together, that form a mosaic of habitat from sewage farm, sand pits, heathland, farmland and woodland. It makes sense to me, if nobody else. I could, given strong legs and a long summer day, visit them all on foot in the same day. I have compiled a systematic list of the birds (currently 201 species) and am working on a checklist of the plants and lepidoptera. I tell you this, when I retire I will not ever have nothing to do.
2010 also saw my return to birdwatching as my principle natural history interest. Plants and moths weren't exactly side-lined, but time spent in the field often involved a telescope rather than a net or lens. After an absence of 16-years I returned to Beddington Sewage Farm, the place where I cut my ornithological teeth. As access is strictly by group membership I was delighted to rejoin and be handed a key to the magic kingdom. This is the land of Killdeer and Glaucous-winged Gull after all.
A week at Dungeness in mid-July was never designed with birds in mind, although the medicinal leech eating White-tailed Plover, a Great White Egret and a pair of Purple Herons had other ideas. Back home it was quite lively. Within a twenty minute walk of my house I saw Quail, Hen Harrier and waxwing (thanks largely to David), plus an in-and-out Ferruginous Duck at Holmethorpe.
My quest to photograph 500 species of plant before the years end was realised by July (I don't know why I continue to set myself such arbitary goals). It was a quiet year for botanical forays, although I did see Purple Gromwell in Devon, Narrow-leaved Lungwort in Hampshire and Deptford Pink and Stinking Hawk's-beard in Kent.
As much as I moan and bleat on within the confines of these posts I do actually feel quite upbeat about things. Now, if this were a film, to counter my positive declaration I would now suffer some terrible natural history curse, such as being struck by sudden blindness in the presence of rarity and beauty. However, all I ask of 2011 is that it is half as interesting as 2010.
Now please excuse me - there are still several weeks left in the year.
at November 23, 2010

Great post and a great year Steve. Have you set any 'arbitrary' targets for 2011? I always do, so now sthe time for consideration. Next year I will mostly be doing - more moths, more 'on foot from home' and, wait for it, maybe, some rockpool marine life too...

I agree with Stewart, great post.
I think i can speak for a lot of people in that we`re pleased that you got twitchy fingers.

Stewart - arbitary targets will include a botanical survey of the sewage farm; 700+ plant species photographed plus uber patch bird total up to 205. It sounds as if you've got plenty to be getting on with.

Dean - cheers mate. I reckon that 2011 will be the year that Cortonwood gets a major goodie, you've just got to find it for us!