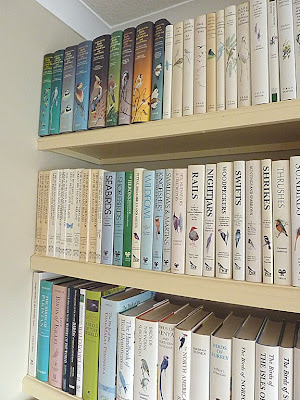 Rarer than a Black Lark. More uncommon than a BirdForum thread with a cohesive outcome. Fewer occurances than Jonathan Woodgate in a Spurs shirt...
That is, at approx 21.35hrs yesterday evening, I walked over to the bookshelf, reached up to the top shelf and took down a volume of Birds of the Western Palearctic. I then proceeded to open it and actually read from it. I have not done this for almost twenty years - and that is a genuine claim. The reason for me doing so was to find out the specific species of plant that Tree Sparrows ate seeds from, and, by and large, the great work had the information.
I cannot help but feel that as nice as they look on the bookshelf (top left of picture) they were a waste of my money. Hooked in from the start (1977, £25 for volume one), I carried on until volume five and then decided that I could live without it. It was out of date before it was published and the artwork was a selection of the good, the bad and the ugly (Cusa's ducks anyone?) I did not complete the set until OUP sold off the excess stock after the series had been completed, when I picked the remaining volumes up for a song. All of my volumes, some of them thirty years old, look as new as the day that I bought them.
So, until I want to check on the stomach contents of Cormorants from Finland in 2030 (when I'll be 71) the books can stay on the shelf, looking pretty and studious.
at November 28, 2010

Email ThisBlogThis!Share to TwitterShare to FacebookShare to Pinterest
Labels: books

Did you take your header picture this morning Steve?