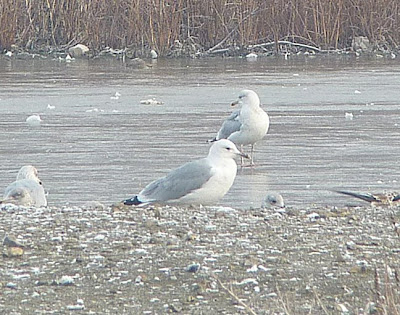 The cold weather had frozen both of the lakes at Beddington this morning, but this state of affairs did mean that plenty of the gulls that were scavenging on the landfill came and stood on the ice for us to scan at leisure. Among them was this 4th winter Caspian Gull (not an adult as its bill is still showing some trace of immaturity.) The picture below shows how much darker the mantle colour is from the nearby Herring Gulls (the Caspian is to the right, facing away from us). 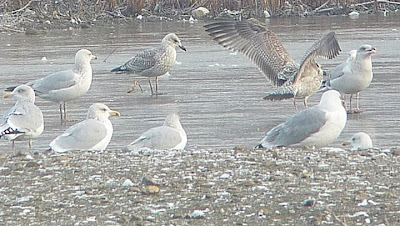 The most numerous species was Black-headed, with at least 7,500 present, along with 350 Common and 50 Lesser Black-backed. Neither of the two Med Gulls seen during the week gave themselves up. 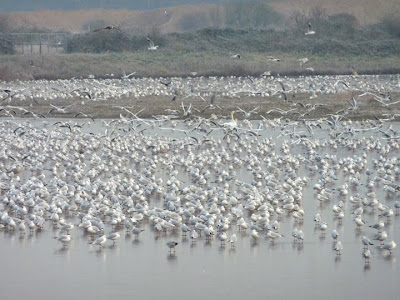 Go on, even if you don't like gulls all that much, they do make a spectacle, and on a day like today when nothing much is moving, it is something to look through with the added bonus of a good chance of picking up the uncommon. 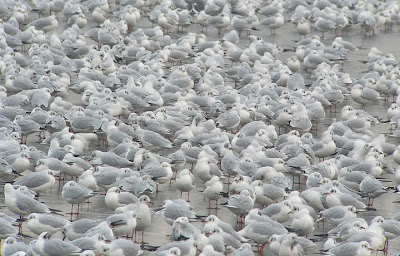 I did miss 2 Waxwing that flew through south-eastwards. I was off checking a stream for Little Egret (seen during the week). No, I didn't see it.
at November 27, 2010

I refuse point blank to look at any of these photos (for reasons you know only too well, Steve!).