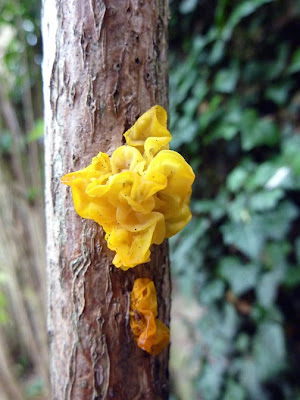 Meet Yellow Brain Fungus - one of two additions to my 'UK All Taxa' list today. The other was also a species of fungi, Split Porecrust. I did take the latter's photograph, but the results were not up to much. The Yellow Brain Fungus was found in my back garden on the branch of a Himalayan Nutmeg. This species is meant to be parasitic on other species of fungi, although I couldn't see its host.

Of local note were a flock of Waxwings that took up residency only a mile from where I live. I wandered along yesterday morning to pay my respects. A few of the human residents who live in the houses around where the Waxwings have chosen to raid the rowans were keen to find out what all of the middle-aged men with binoculars were looking at, and seemed pleased to be shown the tufty trillers. Most had heard of this species from Autumnwatch and one even asked me if Lee Evans would be turning up, as he had watched the infamous BBC4 Twitchers programme.
at November 21, 2010