I couldn't resist it any longer - after having read so much about the delights of Ebernoe Common on Graeme Lyon's excellent blog I decided to go along and take a look for myself. I persuaded my old mate Gordon Hay to come along for the experience.

Neither of us are fungi experts, but on arrival headed straight for the churchyard where I knew an easy to identify species should be present. It was, but just the one... 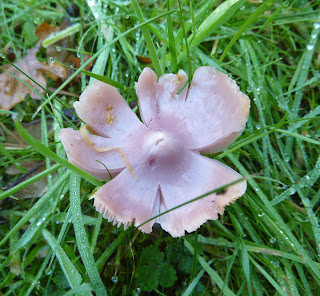 Pink Waxcap! I was pleased with that. We wandered around for a couple of hours and saw, amongst others, Dead Moll's Fingers, Brown Birch Bolete, Tawny Funnel, Field Blewit, Chanterelle, Powdery Brittlegill and Poisonpie. The more familiar Fly Agaric, Lilac Bonnet and yellow Stagshorn were also on show. A number of fungi photographers were also combing the area, on of whom reckoned that the numbers present were very poor due to the dry weather. We were not disappointed with what we had seen however.

After this we went onto Pulborough Brooks (2 Ruff) and Amberley Wild Brooks (Short-eared Owl). Trudging our way back to the car, which was parked at Greatham Bridge, I glanced down into a ditch and was delighted to see hundreds and thousands of green 'hundreds and thousands' - Rootless Duckweed! A new species for me.