North Downs and Beyond AGM

Thankyou all for coming along to this, the first North Downs and Beyond AGM. It's been just over a year now since the blog was relaunched, and visitor numbers have never been higher. No doubt this is due to the high standard of posting that the readers receive. if I can...

Hold on! Aren't we getting high numbers of hits purely down to a number of 'odd' sites sending traffic this way?

Yes. But all's not lost. The blog that sent the largest volume of traffic to this particular blog was always Not Quite Scilly and they've opened again. That should bump the numbers up again, just you wait and see!

But it's not just about numbers is it. And we've got some things to address, haven't we?

Yes, like the complaints about pan-listing. Some say it's for sad twats. And there's one particular person who reckons that Beddington Sewage Farm gets mentioned far too frequently. Plus, your current obsession with fungi - what's that all about?

But other people might not want to see yet another picture of a bloody mushroom.

I was going to show the readers a Common Earthball

I wouldn't advise it! 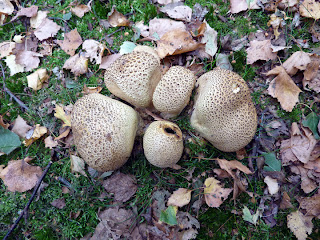 You bloody idiot. That's another set of visitors lost to Jonathan Lethbridge's blog.

It's OK, he just blogs about banking now.

But it's still well written. Better than this pile of...

OK, OK. Shall I mention the new tab feature at the top of the page, with lists and stuff?

I'm sure thet're all dying to look at that...

Brilliant, Steve.
I`ve yet to have a day where i get hits in treble figures :-(

Blimey Dean, you must have read this post as soon as I posted it. I've often been green with envy at some of the fungi pictures you post. Plenty of ticks for me in the Cortonwood area, that's for sure.

The 'Common Earthball' exchange had me laughing out loud. Excellent!

Yes, the Blogger stats are not to be trusted. My suspicions were aroused when 18.5 million people had rediscovered my blog within 2 hours, and yet I'd only informed four or five thousand.
Statcounter works ok though...if you consider the bitter truth 'ok'

Sad you lot have nothing better to do (like sleep)than read this stuff so early in the morning!!

Steve are you sure that is a COMMON Earthball?

Delete last comment, I see it is Googletime, not BST! I might actually have got up by then!

I was happy with the earthball Id John. There were loads of them on Headley Heath. What did you think they might be?

Gavin. Stats are all over the place, not worth bothering with really ,but I do...

No, I was just pulling your leg from my ignorant base. It is one of the few fungi I feel confident identifying (almost always!)