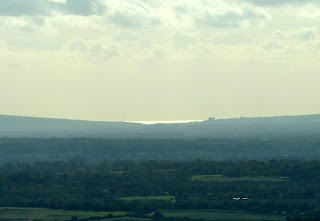 The thin slither of silver that you can see in the centre of the picture above is the sea. No big deal to you, maybe, but to me this was one of those golden moments. I was standing in Surrey and I could see the sea! There was something about that which was rather special. Squint as I might, but I couldn't make out any seabird passage, although it was a bit hazy. Also the 30 mile distance may not have helped. I think the gap in the South Downs that allows us Surreyites to get a salty sea view is where the River Adur empties itself into the Channel at Shoreham. But I maybe wrong.

It is for sure. You can see Shoreham Power Station on the left and Lancing College on the right. That is really cool.

Great photo, Steve. You are one of my cool gang!

Graeme: thanks for the confirmation...

Neil: thanks for the affirmation!