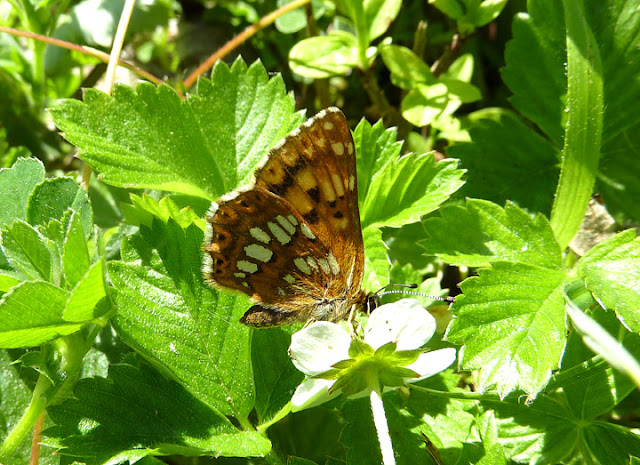 The bare facts are these: yesterday's pan-species meeting at Heyshott Down supplied me with 29 lifers: 14 Mosses and Liverworts, 7 Beetles, 4 Spiders, and single Butterfly, Snail, Treehopper and Hoverfly. But the numbers were really incidental. I could have had many more. If I had written down the latin names that I was bombarded with correctly, I would have understood more fully what was in my notebook. If I had run from group to group like a mad man, then I could have eavesdropped on what identifications were being made. In the end I decided that it was a little bit uncouth and pointless to come back home with a great long list of names that meant nothing to me beyond being another tick in a book. What I can do with my 29 additional species is remember them (or at least try) and absorb them.

My favourite moments? My failure to see Duke of Burgundy was ended, as at least eight of the little beauties flitted around us on and off throughout the meeting (see image above). I was also rather taken by the manner in which one of the other species was added. We had come across some Ramsons growing along the edge of a steep, dark, woodland path. Somebody mentioned that there was a hoverfly that could be found on this plant. Within seconds a sweep with nets provided a hoverfly. Was it our quarry? In lieu of anybody having the hoverfly guide with them, a smart phone went online and we matched the image up with our specimen. Ticks (almost) all round!

This awareness of insect/plant association was put to good use when we came across some Deadly Nightshade and it was suggested that if we looked we may find the flea beetle associated with it - and we did!

So, what did I take from this meeting of some of the keenest minds involved in recording natural history in the UK? Well, although my level of ability in many groups was well below the average of those gathered, rather than feel defeated by it I feel inspired to try and improve. I know it will not necesaarily be easy, but having seen pan-listers in action it's funny what you can glean as to how to go about your own recording. Books that have long remained dormant on my bookshelf (Stubbs Hoverflies for one), will be getting a long overdue dusting down.
at May 27, 2012

Email ThisBlogThis!Share to TwitterShare to FacebookShare to Pinterest
Labels: Duke of Burgundy, Heyshott Down

How lovely to see the Duke of Burgundy, what a treat