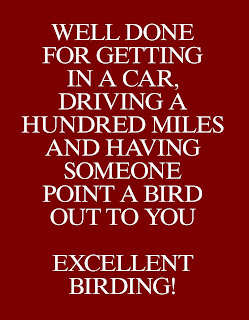 I'm all birded out.

That's a very strange state of affairs for somebody that has hardly been birding at all this autumn, but that's exactly how I feel. I mainly blame Twitter. And therefore I have to, in reality, totally blame myself for checking my Twitter feed on such a regular basis. It's a bit like being a junkie I suppose - a little is never enough - and 'just one more peek' is ignored time and time again.

Because I have several strands of 'rare bird news', the same information gets fed to my phone over and over again. Each update is repeated ad infinitum. Several birders will then have a conversation that I am privvy to. About the same rarities. Several times. Then a few more.

I have already identified (and moaned) about the trend of 'congratulating' fellow birders on seeing a rarity, even if all that they have done is drive a few miles and then walk up to a crowd of birders who then point the bloody thing out to them. I'm glad to see that this theme has been taken up by several other bloggers. This can only be a good thing and hopefully this shallow practice will cease.

I used to be a level-headed sort of birder, all 'hail fellow well met' and happy to be a part of the greater ornithological family. I'm now more like an eccentric uncle who turns up now and again and does nothing more than disturb the equilibrium of the youngsters who are having fun. At least I realise it.

I'm going out birding tomorrow. I'd better not 'find' anything otherwise I'll have to come up with a different way of explaining what I've done...
birding