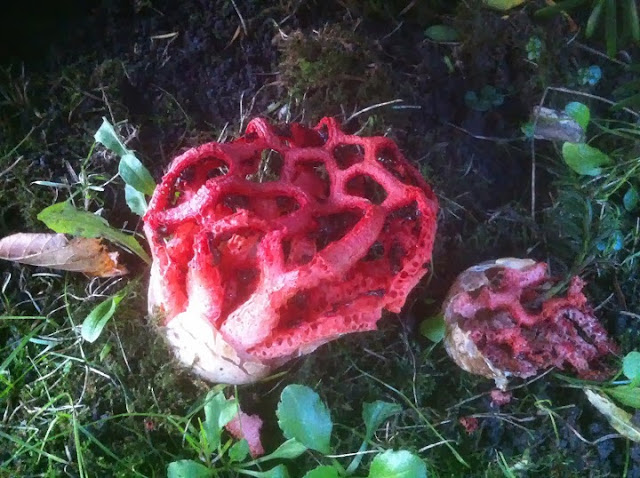 Just before I left the office this evening I checked my emails to find one from Banstead's very own botanical guru, John Peacock. He was alerting me to the appearance of Clathrus ruber, a sessile stinkhorn that rarely appears in the UK. It has an English name - Red Cage.

I have longed after seeing this species, and had looked in vain for it before, when John discovered it growing under a yew tree in Banstead two years ago. Last year was a no show, so his message had me detouring from home. The light was fading and I only had my camera phone with which to record this striking fungus. I could see two fruiting bodies from some way off, one much larger than the other. There are several coral-red species, all with an exotic and startling appearance that, I believe, come from Australasia. Their appearances may be increasing, particularly on municipal wood mulch.

The irony of rushing off to twitch a fungus is not lost on me. I expect cries of 'hypocrite' to come from several birders...

Andrew Cunningham said…
Nice one! This has been on my mind over the last couple of weeks each time I pass woodchip mulch.
23 October 2013 at 19:47