Don't fence me out!

October 19, 2013
This morning I wandered over to Surrey Wildlife Trust's newest reserve (so new it isn't yet open) at Priest Hill, Ewell. I've known this area for many years. I used to play school football on the playing fields, have wandered over the abandoned eastern half with binoculars and/or dog and spent more than a few hours doing botanical survey work for the Surrey Botanical Society. Basically it is a flat area, maybe one mile long and half a mile wide, largely comprising basic grassland with a small amount of scrub. It does not possess a rich fauna and flora although I doubt that much work has been done over the years - however, I'm sure a trawl through the literature would result in one or two nice surprises.

You can read about the SWT's plans for the site here.

Now, as you can gather from my last post, I have a downer on the over use of fencing. Like this: 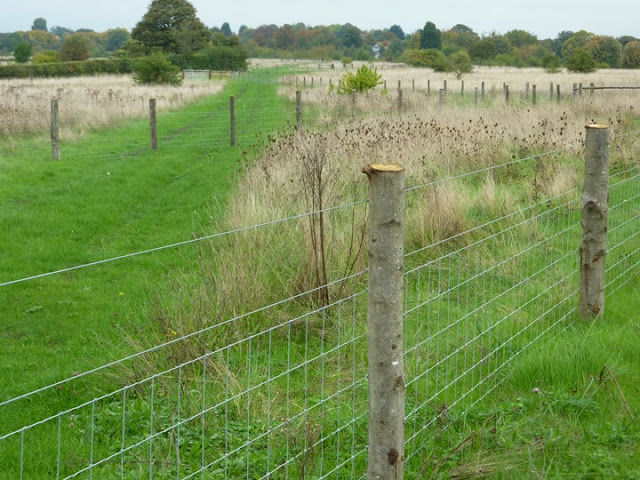 I took this picture this morning, looking NW across the reserve. The wide ride that you can see used to be accessed by the public, but is now criss-crossed by several fences. I should point out that local people have, until now, walked over this ground for many years, although I'm not sure that access has ever been strictly 'open' - this happened to be one of those abandoned parcels of land that had been utilised by those people living nearby. 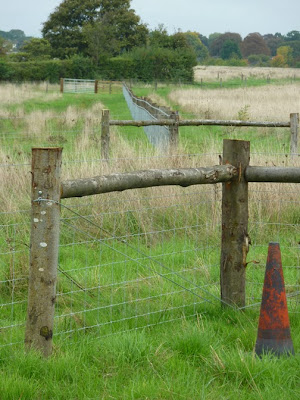 More fencing (left). I walked across the site and was herded (by fences) into a narrow funnel. I doubt that 10% of the area was open to me. Most of it appears to be off limits - and this was an area that had 100% access until recently.  Maybe I am ignorant to the needs and ways of running a 21st century nature reserve. It could be that, once the prep work has been completed, some of these fences will be taken down, or access granted via stiles or kissing gates.

I believe that livestock will be utilised on site, so of course secure fencing is needed, but surely not to the exclusion of people? Belted Galloways are used at Headley Heath and Colley Hill without the need for the exclusion of humanity.

If we wish to educate the public at large, encourage the appreciation of wildlife and use the amateur naturalist to add to the understanding of an area, this cannot be done by fencing them out. And why fence them out anyway? What is being protected? Rank grassland? A pair of Skylarks?

My hope is that access will be allowed beyond that which is currently offered. I hope that the only thing on show here is my ignorance. The nearby reserve (also SWT) at Howell Hill is fenced off, but has gates at either end granting access the whole site, a wonderful chalk-spoil hill full of orchids. Priest Hill seems to offer the visitor a walk around the edge of its perimeter fence. I was looking forward to a reserve within walking distance from my home. I hope that I've got it wrong, and that, at the opening, all will be of a positive nature.
Priest Hill Surrey Wildlife Trust

Anonymous said…
Hi Steve,
I agree with you. I visited a few weeks ago and was disappointed to find so much fenced off. I am hoping this is just so that work on the site can be done and that access can be restored fully when it is done - perhaps Surrey Wildlife Trust can clarify for us?! With a bit of luck this will become a great reserve in time - I have long thought it could be a good vis mig site...but as I live in Yorkshire I haven't been able to put that to the test!
19 October 2013 at 18:53

John said…
Steve
Although I agree with your sentiment you have to remember that the area has been used as motor bike tracks etc sometimes by quite aggressive individuals. I suspect the feeling is that fencing the whole area, so allowing livestock to roam freely would be asking for trouble. Once everyone (!) get used to grazing and the fact it has become a reserve they could have a rethink.
I hope I am right.

Steve Gale said…
Hi Stephen - you are correct about the vis-mig potential - marvellous big sky and uninterupted views!
20 October 2013 at 13:00

Steve Gale said…
I hope you are right as well John. I just don't understand this knee-jerk reaction to fencing off land.
20 October 2013 at 13:02