November 07, 2013
A free morning and the possibility of a local Yellow-browed Warbler saw me at Holmethorpe Sand Pits shortly after eight. Although up to a dozen birders were present, the bird failed to appear. This is the sort of situation that sends me into a game of chance - do you stake out the known haunt of your quarry in the hope that it will come back again - or do you wander off, trying to guess where the bird might have gone but in the knowledge that you increase the chances of missing the bird when it reappears where it has appeared before? I did a bit of both.

The fact that I didn't see the warbler was made all the easier by spending a wonderful couple of hours with my old mate Graham James. We were joined by David Campbell (taking time off from his university course in twitching), but sadly I missed Neil Randon, who had obviously set his alarm far earlier than I.

As much as I spent four hours in the field searching for the warbler, it cannot be considered that it was time spent birding. Standing still in likely spots can only entertain for so long...

A brief stop at Canons Farm (to count the Linnet flock) was made. There have been counts of 600 birds - today it was just 250. 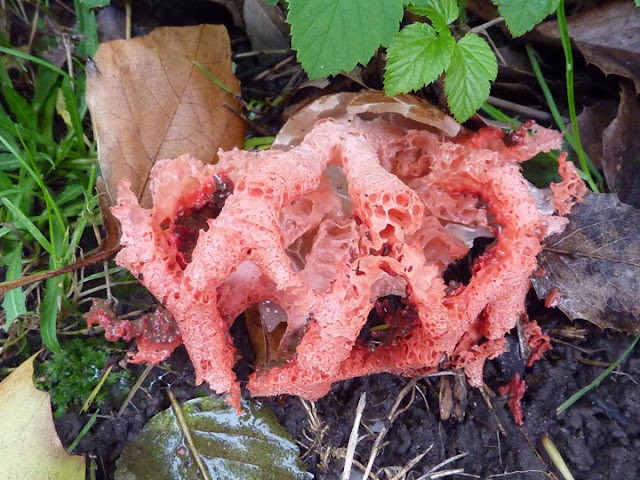 Before the light faded I visited the Red Cage site in Banstead, where the latest eruption has folded like a tired souffle (see above). These fungi are disturbing, looking like offal, heart valves and rock-pool debris. And all from an egg.
birding Red Cage

Andrew Cunningham said…
I read this on Dipterists Forum this evening and thought of you. Maybe one to look out for next year?

Factor said…
Shame I didn't bump into you Steve. We chat constantly via the blogs and Twitter but I think I've only ever seen you face-to-face about three times! I was up a bit earlier but when Graham and I couldn't find the Y-b Warbler around the water Colours Lagoons I thought I'd search further afield and set off round Mercer's Lake and up to Spynes. Had to get back soon after as I had too much work on. It's a nightmare when earning a living gets in the way!
8 November 2013 at 13:40