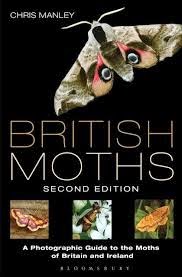 I don't automatically buy new editions of books that I already own. Quite often they can be almost straight reprints that offers the purchaser nothing more than having the same book but in better condition - and then there are those new editions that offer you an almost completely different book. British Moths, by Chris Manley, is one of the latter.

Although boasting the same number of pages as the first edition, he has managed to include 800 additional species, most of these being micro moths. To accommodate this the butterflies have been dropped, but this is no loss considering the wealth of books available that cover them. So now we have 2,147 species to peruse, of which 871 are macros and 1,276 micros. If for no other reason, this boost in microlepidoptera makes buying this addition a must. But that is not all...

Plenty of species that appeared in the first book have had their images updated, and all the photographs have had the subject rotated so that they all face the same way, making comparison easier. Also new are the distribution maps for all resident species (including micros) and a comparative size bar underneath each image. The systematic list and numbering adopts the 2013 Agassiz, Beavan and Heckford order, but the 'old' Bradley numbers appear at the end of the species accounts for older referencing.

Within 10 seconds of picking up this book to browse through, I knew that I was going to buy it. As someone who has largely dabbled in micros for a while now, but not fully embraced them, this book cannot do anything other than help me become more competent with them. It has certainly lit a fire under my enthusiasm and I'm raring to go!
book Manley Moths

Bennyboymothman said…
Got it coming as well, and as it is a hardback I will take it with me for micro identification in the field rather than struggling to remember and inevitably making one part of the name up!
25 February 2015 at 07:41

Steve Gale said…
The hardback may make the book more expensive, but it lends it a certain amount of gravitas Ben.
25 February 2015 at 17:52

Unknown said…
I hold you responsible for reducing my bank balance by a shade under £25!