The only way is Lethbridge 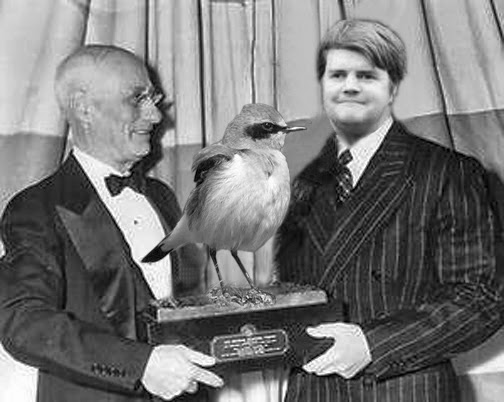 Midnight has passed and the curtain has come down on the third North Downs and beyond Wheatear festival. This year there were three awards:

Overall champion
Whoever posts the most images of Northern Wheatears by the end of April 2015. A photograph of five birds together counts as 5 images

This year the competition was serious, with tactical posting, late runs and some quite frankly underhand manoeuvres taking place.

An early runner was Tony Brown (aka The Cowboy Birder) from Essex, who got in early and had posted eight images even before March had ended. But the stress of birding in the shadow of a Wheatear Fiend (more of him later) and a badly timed trip to Morocco saw his brave attempt at the crown falter.

Sitting quietly in the background was Beddington's very own Peter Alfrey (Non-stop Birding), who had taken on the guise as a disinterested bystander but was really sussing out the competition and putting into plan an audacious attempt to snatch the trophy at the last minute. It really kicked off in mid-April when Peter produced a Wheatear-heavy post, including a multiple white-arse image. This took his tally to 16, which in previous years would have wiped the floor with the competition. Had he shown his hand too early?

Meanwhile, down in Devon, Steve Waite (Axe Birding) was assembling an entry. I don't even know if he is aware of this competition as, although his blog is linked to mine, mine isn't to his. However, by 28th April a very healthy white-arse tally of 15 had been reached. He is, by the way, a birding chum of Gavin Haig, our very first NDB Wheatear champion.

Talking off past champions, the Kent assault on holding onto this most prized of ornithological accolades didn't get off of the ground. Martin Casemore decided to use up all of his pixels on gulls instead...

April 30th dawned with the competition looking like a two-Wheatear race. And then the gloves came off and it got dirty. Very dirty indeed. Peter Alfrey went for broke by posting an entry that added a further 10 Wheatears to his total - or did it? I smelt underhand tactics. One of his images was clearly labelled as being an autumn bird - certainly not from 2015. Not allowed. And he had reused an earlier shot of five birds. Not allowed. And then he compounded this wrong doing by panicking and posted that same repeated multiple Wheatear image ten times!!! He was hoping for further 50 points, but instead only succeeded in muddying his name at the 'Oenanthe Club'. It did show a desperate desire to be crowned 2015 champion that we can, however, understand if not condone.

That just leaves us to report on this year's final challenger - Essex's Jono Lethbridge (Wanstead Birder), a man so obsessed with all things 'Wheatear' that he paints the seat of his pants white every spring. Rumour has it that he has claimed to have been a Wheatear in a previous life. Despite several long-weekends out of the country, he consistently posted Northern Wheatear images from his beloved Wanstead. And they were all of a high quality. Indeed, when he started to get edgy about other bloggers threatening his grip on the NDB crown he raided his folder of rejected images to post a few more - his rejects are, by the way, other birder's 'best ever' shots. When Peter Alfrey got within one bird of him in mid-April, Jono dumped a further 16 on his blog. This man wanted to win. He needed to win...

Before I reveal the final result, here are the other two award winners.

Earliest post
Congratulations to Sean Foote, who tweeted an image of the Staines Reservoir Northern Wheatear on Sunday March 8th. His prize is a weekend at Portland Bill... ;-)

Best photograph
This is going to be shared. From a quality point of view nobody can touch Mr Lethbridge, and his 'crouching white-arse on post' gives us a different perspective on this charismatic chat. Peter Alfrey's study of a Wheatear in an urban environment sums up migration for me and gives me goose-bumps. Both images will appear on BBC Countryfile's 2016 calendar. 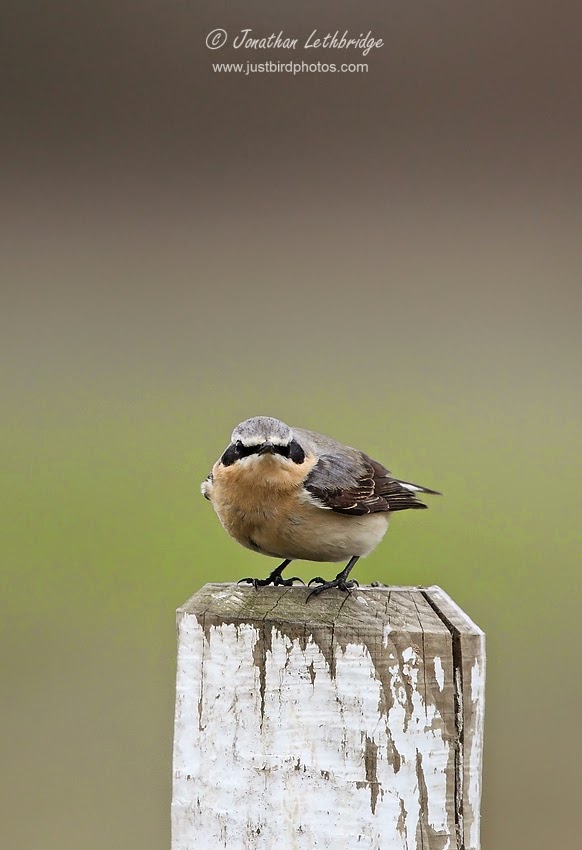 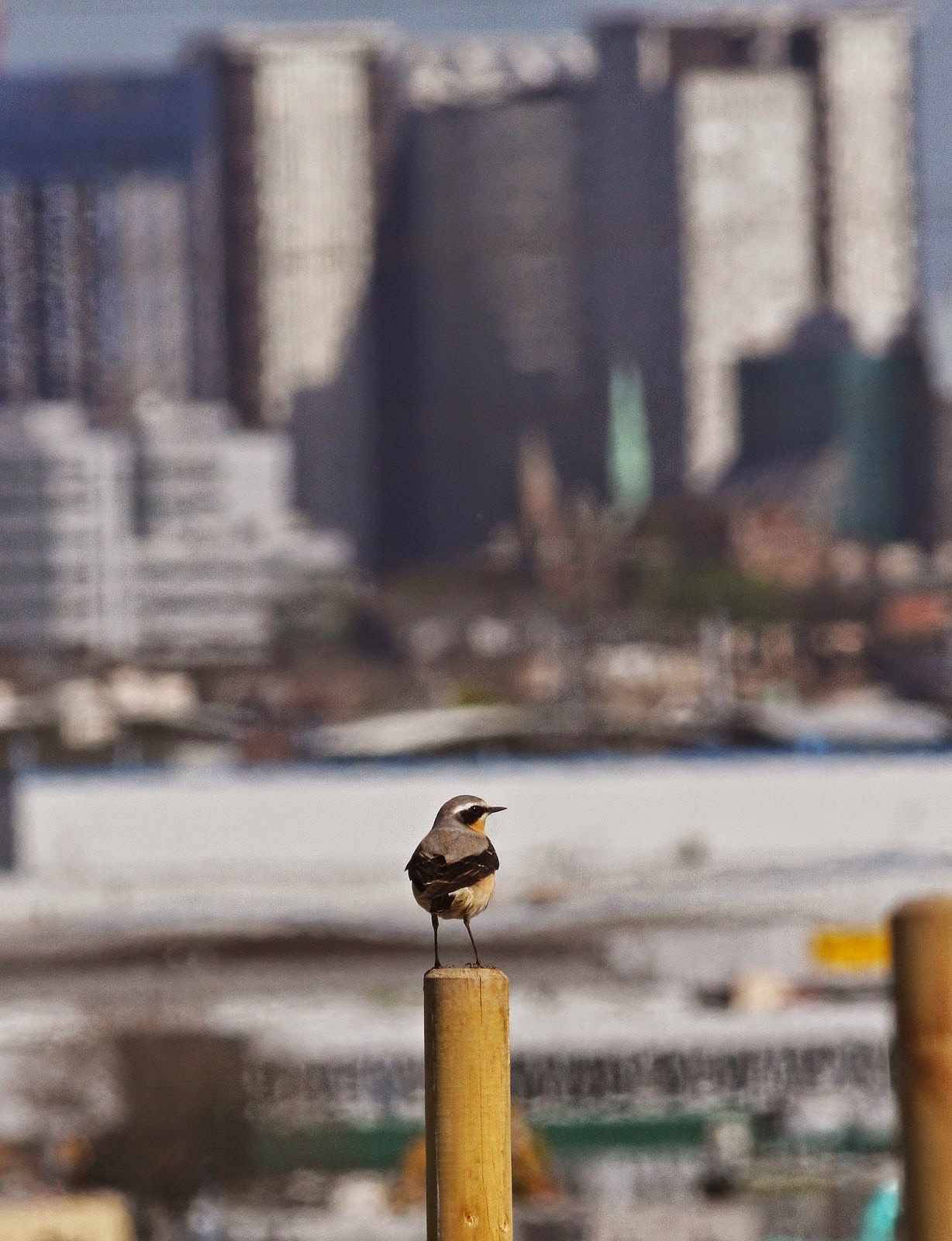 So that just leaves the big one. Who is the North Downs and beyond Wheatear trophy winner of 2015?

In the early hours of this morning, in a marquee erected on Wanstead Flats, I presented Jono with his trophy (top photo). He dedicated his win to all "white-arse fanciers everywhere" and proceeded to sit on top of a grassy hummock, bobbing up and down just like his favourite species does.

Tony Brown said…
Bitterly disappointed not to make the podium, I think taking the lead too early was my ultimate downfall, I just folded under the enormous pressure - this experience will only make me stronger for next year. Congratulations to all the category winners!

Simon Douglas Thompson said…
I'd love to see one, I keep missing them in my local whitearse haunt. Rather embarrassing, as I wrote about them for a local paper.
1 May 2015 at 13:34

Jonathan Lethbridge said…
I'm overcome with emotion, I don't know what to say. Actually I do, Peter can we use the image above for the 2015 LBR please? It just screams London birding and is superb.
2 May 2015 at 21:50