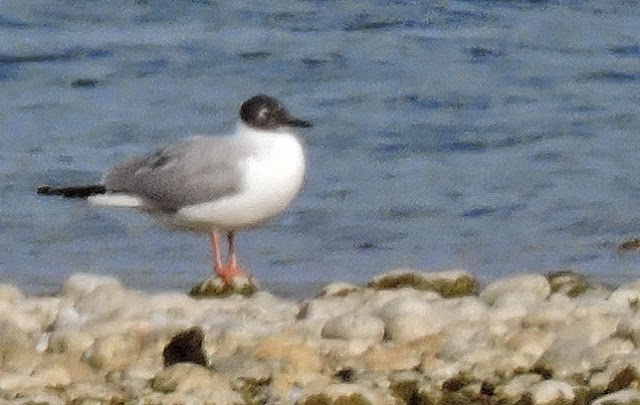 My eight-day stay at Dungeness lived up to all expectations. Admittedly, there were no decent sea watches and no falls, but mid-May is not necessarily the best time for either. My hopes were largely for a few good birds (duly delivered), maybe a migrant moth or two (box ticked) and, just as importantly, a chance to catch up with old friends and to make a few new ones along the way. In these respects it was a week to remember.

So, what will be the subject of my first 'Dungeness May 2015' post? The two summer-plumaged White-winged Black Terns? The Ni Moth? An invert round-up? Or the drake Blue-winged Teal that us Brits found on the other side of the channel in a cheeky smash-and-grab raid? No, none of them, at least not yet. It is the tale behind my belated ability to use the term 'BOOM!' (but only in an ironic way, honest!)

Last Saturday evening (May 16th at 17.20hrs to be precise), I found myself alone in Dennis's Hide on the Dungeness RSPB reserve. It had been a warm and sunny afternoon and I was enjoying the coolness of the hide, scanning the viewable small gravel islands that had been enticing small numbers of waders all day (Turnstone, Grey Plover, and Knot amongst others). A few Black-headed Gulls and Common Terns were present, and as I carried on scanning along the edge of one particular island, came to a gull that immediately got my alarm bells ringing. Surely it had a black - not brown - hood! And its leg colour was a bright orangey red! And it's bill was black!! It certainly wasn't a Black-headed, so what was it?

Although I had nothing to directly compare it to, it seemed small in stature, and in my increasingly agitated state started to eliminate such species as Franklin's and Laughing (although neither were real candidates for this bird) and the black primaries and general shape were wrong for Little. It had to be a Bonaparte's, surely?

I am, by my own admission, a rusty birder. Maybe 25 years ago I would have called it, but my confidence was not up to that. I didn't have a field guide with me (it was back at the observatory) and I frantically tried to dredge out any half-remembered Bonaparte's Gull identification features. The underwing pattern of the primaries! That was something that had stuck, so I made a mental note to look for that if it flew. In the meantime I took in what I could through the scope and decided the best thing to do was obtain some record shots of the bird using my bridge camera. I took maybe half a dozen and checked the back of the camera to ensure that there was something usable, and there was - phew! Looking back to the island at where the gull had been there was now an empty space... it had gone! Bugger!! I scanned frantically left and right, believing my chance to see the underwing pattern had come, but was dismayed not to find the bird at all. After a couple of minutes of this desperate searching I needed guidance. Did Bonaparte's Gull exhibit such leg colour? I knew a man who would know.

Dave Walker answered his mobile but was out in the middle of Walland Marsh. I went through what I had seen, and he made positive noises that it could be a Bonaparte's but clearly needed to see my pictures (and preferably the bird) to make a sound judgement. I returned to scanning the pit, but it was still missing. Did I let the locals know? Had the bird still been present I would have done straight away, but really needed to look at some literature to convince myself that I wasn't making some sort of cock-up. When you lack confidence in your birding you doubt yourself at every move.

To cut a long story short, after spending a few minutes with 'Olsen and Larsson' and showing the returning Dave my images, it all became clear - the bird was indeed an adult Bonaparte's. The locals were duly informed, but further searching that evening drew a blank. A number of lessons had been learnt. One - carry a field guide. It's not dudey to do so. Two - carry a bridge camera. The results may often just be of 'record shots' but these can be good enough to prove (or disprove) the identification of the subject. Three - on a personal level, have more faith in your ability.
Bonaparte's Gull Dungeness

Simon Douglas Thompson said…
He should have his wing tucked in under his breast feathers!
18 May 2015 at 14:19

bob smith said…
Well done Steve
On a more mundane note -were you aware that there is an Eric Ravillious exhibition at Dulwich Picture Gallery until August?