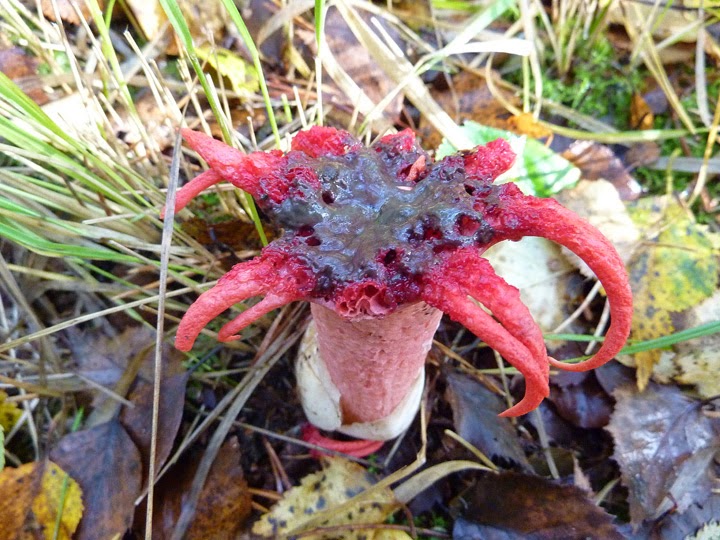 My pan-listing total is a sham. Read on...

Birdwatching was my entry point into the world of natural history, which is served very well by field guides and populated by a user-friendly subject matter - there are very few species that are not identifiable in the field using just eyesight as a tool. When I started to add butterflies, moths, dragonflies and plants to my sphere of interest I just took it for granted that I would be served well by accessible literature to help identify them - and, to a large extent, I was. Admittedly, it wasn't as straight forward to put a name to a lot of the micro-lepidoptera, and some of the plants (particularly grasses, sedges and rushes) were a big challenge, but all were do-able with patience and the right specialist guides.

So, when I first had the bright idea of finding out what other life forms I had identified in the UK (way before pan-listing came into being), I thought that it would be a simple matter - after all, there must be field guides for everything in a well-studied country like ours, mustn't there? And, to some extent, there were.

For starters, I opened my copy of the Collins Insect Guide (Chinnery), a publication that I had purchased some time in the late 1980s but which had remained largely unopened. Here, I thought, was a book that would be the insect version of the bird guides that I was so used to - comprehensive. And so I began to leaf through the pages, noting down species that I knew I had seen. But here I reached my first hurdle. Not all of the species recorded in the UK were in the guide - not by a long chalk. In fact, for some families, the book just scratched the surface. But I wasn't really aware of this, and if a colour plate of illustrations was set out before me, it was an easy thing to match 'my' insect to the closest one depicted. Metallic green fly? Simple, that must be a Green-bottle. I add a tick to my list.  My errors had now started - there are quite a few species of 'green' flies - even a photograph of one in the RES British Insects book is captioned as Lucilia sp, and this has been compiled by experts. What chance does a birder venturing 'off-piste' stand?

You can take that Greenbottle and add to it many other species, identified by myself in good faith but probably wrong - a bit like starting out birding and calling every phylloscopus warbler that you come across a Chiffchaff, even though some will be Willow and maybe even the odd one a Wood (the latter increasingly unlikely in Surrey though!)

So, my blossoming 'all taxa' list started its life flawed. And it didn't stop there...

A few autumns ago I started to look at fungi and really enjoyed it. Loads of species, some good looking ones too. I had several guides and tried to piece together identifications from them collectively. Again, none of them were comprehensive, but I steered clear of anything that closely resembled another, mainly nailing my ID onto bright, obvious species. Couldn't go wrong, could it? Well, yes it could. My 'obvious' Scarlet Elfcups were not so obvious after all - they could have been Ruby Elfcup. I didn't become aware of that species until the Collins Buczacki guide came out. And what about all of those Waxcaps that I've welcomed onto my list? Aren't they all now being split, lumped, rolled up into a big jelly ball and chopped up again? At least my Starfish Fungus (image above) is straightforward enough - or has a team of European mycologists found out that there are really six different species?

Truth time. My current 'pan-list' is riddled with honest guesswork, all observations that were made at the time with good intent. It should really be binned and constructed again. I bet one or two of my micro moths and plants aren't beyond investigation. But what does slightly comfort me, if we were to take this exercise as purely a numbers game, is that if I've claimed a Scarlet Elfcup (which I have), but it was really a Ruby Elfcup, then it hasn't effected the true number of species that I've seen. But, from a scientific viewpoint, the record is almost worthless. Luckily for me I do not send in my records for groups that I am not confident about, so none of these rogue records are in circulation. If I thought that I had stumbled across something noteworthy then my first course of action would be to notify an expert and get it confirmed. I'm yet to do that.

Because this game is just that to me - a game - I don't lose sleep about it. It is not my profession. If it were then I would need to do something about it. Strangely enough, this realisation that a small proportion of my past records are compromised has only made me more appreciative of the available knowledge and the expertise of many biological recorders. To keep up with the latest developments in taxonomy, identification features and to track down helpful literature takes time and effort. It is a full-time project. And it isn't lost on me that the experts can often revisit their collections only to find mis-identifications. We are all human, after all.

I'm basically a birder - but I also have a moderate working knowledge of plants, moths and butterflies - and I am an expert in none of them. I have a massive appreciation of our natural world. I have a curiosity to find out the names of some organisms that I come across.

I'm quite happy with that. And my pan-listing total? For now, it remains unaltered.
pan listing

Ali said…
Mistakes are a part of the process, but for me one of the fascinations is nailing the ID and learning how to get there (like checking the back of the elfcup under the microscope). Every so often I do a bit of housekeeping and remove any dodgy records that have crept in during impetuous moments. I figure if I can't submit it as a record then the ID wasn't good enough.

This means I spent a bit of time asking/annoying actual experts. On the other hand it also brings the reward, for me, of improving the data on which other people can work. I get as much of a kick out of a new square on an atlas as a "tick" on my list - maybe more.

It also means knowing when to hit the brakes and record something as a Cortinarius sp. or a Phorid! I bet I still have records on my list that wouldn't bear scrutiny, even by me.

Steve Gale said…
Ali, part of my problem is trying to be a field operative only, rather than someone that brings the subject matter indoors. This does not sit easily with many orders - in fact, it can be an impossible task. As for knowing when to hit the brakes, I have walked away from more invertebrates than I have tried to put a name to. I certainly know my limits...
6 May 2015 at 11:48

Factor said…
Strange as this may seem, I am currently putting a book together on Flies of Surrey, edited by Jeremy Early, for the Surrey Wildlife Trust. There's one on Wasps already published, which is very extensive. I'll let you know when it is available - it will be soon.
6 May 2015 at 19:01

Steve Gale said…
Neil, as I sit here typing this I can look across at all 14 of the SWT excellent Surrey guides, including wasps. I will certainly buy the flies volume when it is published. Are you doing the design and production, or are you subbing it?
6 May 2015 at 19:07

Ali said…
That certainly limits some things, although probably in a sensible way!
7 May 2015 at 12:33