At Dungeness last Thursday the wind swung easterly and the rain set in. The local birders predicted a good bird and they were right - well, almost right, as none of them had actually predicted that there would be TWO good birds. The RSPB reserve was the chosen stop off point for these two White-winged Black Terns (above) and it was Martin Casemore (click here for proper images) who got the prize as their discoverer. As it turned out, none of us needed to run for them as they decided to stay put for two days, spending most of the time on Burrowes Pit with the odd foray onto Dengemarsh. I spent quite a few hours watching them as the chance to see summer-plumaged birds in the UK does not come along that frequently. One bird was a little mottled on the breast and underwing coverts but the other seemed to be 'fully formed'. 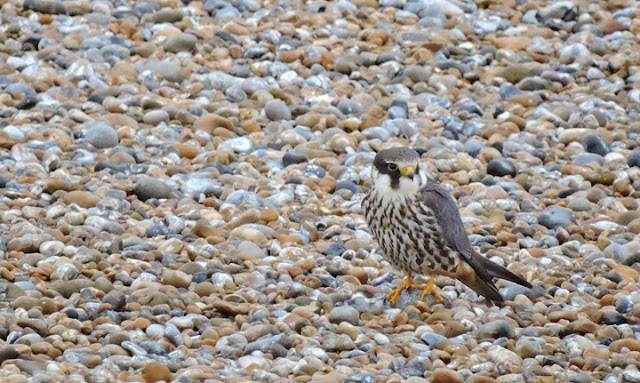 If any species became a birding emblem for the week then it was the Hobby. During my eight day stay, up to half a dozen were seen (or suspected) to have arrived in off the sea at the Point itself, including this individual that pitched onto the beach one dull, damp morning. The RSPB's Water Tower pits was the centre of Hobby action, with a minimum of 22 in the air together last Sunday morning. Any scan of the sky from the reserve usually revealed 6-8 birds at any given time. Magical.
Dungeness Hobby White-winged Black Tern White-winged Tern