June 02, 2015
I've had a lie down and have almost recovered from my rant. It would be easy to embark on another one, aimed at 'Flaming June' and suggesting that we could rename it 'Freezing June', but will desist. The news channels have been reminding us that unseasonal weather is not a modern day phenomena and have unearthed footage from forty years ago to this very day - June 2nd 1975 for the slow among us - when snow fell. The Met Office says:


Scattered sleet and snow showers were reported in East Anglia and the Midlands and even penetrated as far south as the London area. This was the first time since 1888 that snow and sleet had been reported as widely so far south during the summer. Several county cricket matches were abandoned due to snow, the most notable were between Essex and Kent at Castle Park, Colchester and between Derbyshire and Lancashire at Buxton. Strong to gale force winds, occasionally severe on coasts, occurred in Scotland and Northern Ireland with many places reporting gusts in excess of 40 knots.

I've just looked in my 1975 notebook and I made no mention of the weather, just that some young Blue Tits had left the nest box in the back garden.

Want something summery? How about an Adonis Blue from the archives. I bet that there are more than a few of them wondering why they bothered to emerge... 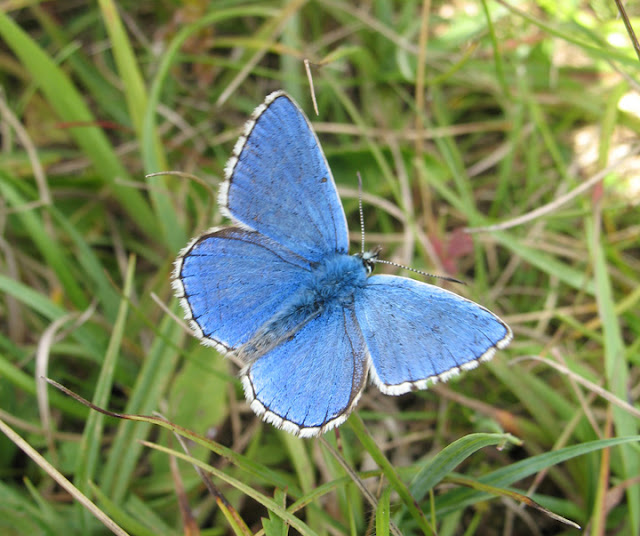