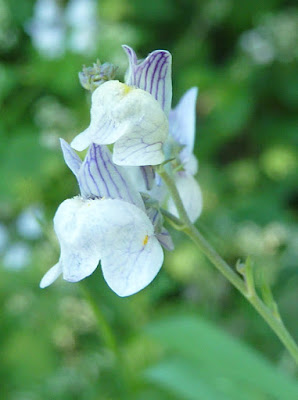 My main aim this morning was to hunt down a Purple Emperor in Banstead Woods. It was a leap of faith, as none have been reported there this year, although they have been on the wing elsewhere in southern England.

The Emperors of Banstead Woods are a bit of a mystery. They are clearly not in great number, hence they get little attention. The rides through this particular wood are not very open, which makes observation of the tree tops difficult, plus the hope that an observable male will drop down to hydrate on the ground is that less likely. Only a handful of sightings are made each year.

I wandered the rides during the recognised hour (10.00 - 11.00hrs) when the freshly emerged males drop to the ground to indulge in a bit of proboscis pumping (at a puddle, rotting carcass or mammal excrement). Well, that is the perceived wisdom, anyway. Banstead Woods is big, so me wandering the rides with no success was hardly surprising. Highlights did include a couple of Silver-washed Fritillary, plus a Red Admiral that swept by and got me going for a couple of seconds.

I then crossed the road and went onto Park Downs. I really am getting to love this place. Two weeks ago it was all Dropwort and orchids. Today the overriding colour was brought courtesy of Lady's Bedstraw, various St. John's Worts and Marjoram. I had a grid reference (courtesy of Peter Wakeham) to help me track down a small patch of Pale Toadflax. What a smashing plant it is (see image above) - a delicate and much underrated species, and a new one for me. I could not remember whether I had seen one before and realised that I knew very little about them. I was surprised to find out that it is considered to be a native species (in some reference works only).

I have visited Park Downs at least seven times in the last two weeks and the speed of change-over in flowering plants has been quite dramatic. Also, whereas I was observing a shimmering mass of Marbled Whites over the sward not 14 days ago, today, in good conditions, there were but a fraction of the numbers. Just goes to prove the need to keep on visiting a site, because failure to do so means missing out on so much.
at July 10, 2015

Taken you a long time Steve but it was worth it!!

There you are, told you to stick to the wild flowers - much better success.

Apart from the wind, they don't move Derek!