A plea for an arable time capsule 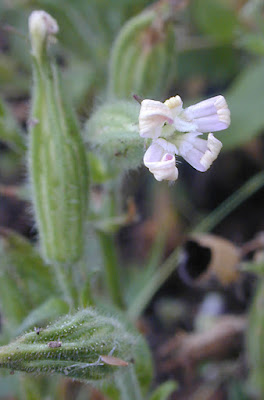 Langley Vale Farm, that nestles close to Epsom Downs race course, is a botanical jewel. Unfortunately, it might just become a former botanical jewel. Up until a couple of years ago all of the field margins were ploughed and game cover strips were maintained for pheasant shooting. These margins played host to a wonderful selection of arable plants, a disappearing group of flowers that cannot survive with the application of modern agricultural methods. My personal list of species recorded here is wonderful: Field Gromwell, Venus's-looking-glass, Night-flowering Catchfly (left, photographed there in 2006), Sharp-leaved Fluellen, Round-leaved Fluellen, Cat-mint, Rough Poppy, Narrow-fruited Cornsalad, Small Toadflax, Dwarf Spurge - enough to get even the most hardened of botanists salivating! Last year Red Hemp-nettle was found, a true rarity in Surrey.

The farm came up for sale two years ago and was purchased by the Woodland Trust, whose worthy aim is to plant a woodland to commemorate the centenary of the Great War. Trouble is, such actions will extinguish the botanical gems that the area holds, species that are being systematically destroyed across the country.

Field work carried out across the farm so far this year has revealed that the margins have not been ploughed, which has resulted in the crops growing up to the hedgerow/woodland edge and rank grasses taking over any bare areas - meaning that the uncommon arable flora cannot grow. As far as I understand, farming ceases in 2016. So what does the future hold for the site?

It can only be hoped that the Woodland Trust will understand what treasures lie on their land and will be sympathetic to the keeping and maintenance of some of this arable wonderland. Woodland can still be planted - it's a large area - but hopefully arable areas can be kept. The seed bank for these plants can be long-lived, so a year or two of disappearance needn't mean extinction. Such a suite of species is rare indeed in 2015. It would be a crying shame if they are all lost.
at July 19, 2015

Write to them Steve, they may not know....

They do Stewart, the Surrey Botanical Society are on the case...

Steve, seems ludicrous that such an important site is going to disappear under trees, although there are clearly ways that the Woodland Trust can retain at least part of the site in it's present form. I trust that the Surrey Wildlife Trust and any local Butterfly conservation society have also been made aware.

I can assure you Derek that the local wildlife groups are aware. Early days...

Maybe worth talking to Plantlife.

Hi Gareth, Ann Sankey (BSBI recorder) is on the case!