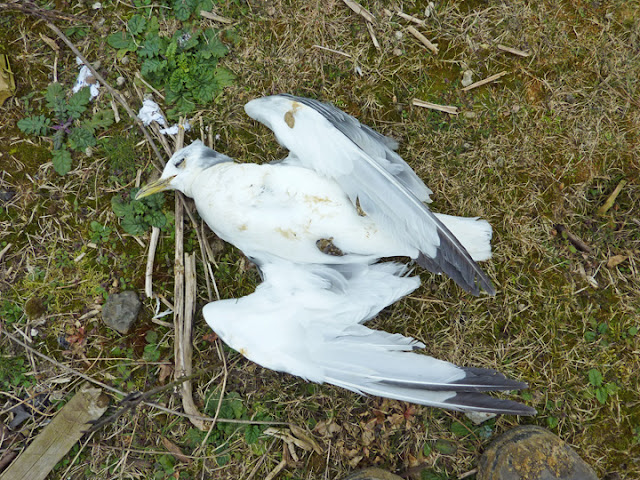 Imagine a lad in his late-teens, and a long-haired art student at that, walking into a High Street branch of Boots the Chemist and asking to buy a needle and syringe - and, wait for it - being served without any questions! Wouldn't happen now, would it? But it did in 1976, for I was that student, and I also purchased a bottle of formaldehyde at the same time!!

I wasn't about to shoot up with said chemical, which apart from setting my arm to a concrete hardness would no doubt have killed me as well. I was in the throes of one of my obsessions, which was the collecting and preservation of dead birds. I'd better explain...

At some time in 1975 I had started to make a note of the dead birds that I came across. These were largely found at the roadside, along a tideline, or washed up along the water's edge at reservoirs. If they were fresh enough I would pick them up and examine them, taking in all of the markings, the colours and the bill shapes. It seemed a natural step to keep some of them as reference material. There was also a listing element to all of this, as I kept a tally of species composition and number between 1976-79. I still have those lists and they make interesting reading.

Pagham Harbour was my most successful hunting ground and I used to scour the tideline, penknife in hand, ready to hack off a wing or a head to take home and add to my growing collection. My rucksack at the end of the day had swapped a cargo of sandwiches with a morgue of feathered bodies. And I was using public transport. One particular large gull wing was just a bit past its best and the railway carriage was soon enveloped in eau-de-blackback.

Back home, to the bemusement of my family, I kept this grisly collection in a chest of drawers in the garage. I had been given a few bits and pieces from other birders, my two prize items being the wings of a Jack Snipe and a Barn Owl. I would inject any meaty item with the formaldehyde, which apart from smelling like a school chemistry lab hardened the flesh and stopped it rotting. A friend of the family had heard of my strange habits, and brought me a pristine female Kestrel corpse. I buried it in the garden, hoping to retrieve a perfect falcon's skull several weeks later, but hadn't bargained for a Fox coming along and digging up an easy meal.

On another occasion, I opened one of the drawers to find a Lesser Black-backed Gull wing had been nibbled by mice. This was the last straw for my father, who insisted that I remove this amateur museum to another place (preferably away from his home). I ignored him, thinking that he would forget about his many warnings, until one day I returned home to find that he had taken the whole lot and burnt them, all gone on a pyre of wood and newspapers.

I don't seem to see as many dead birds nowadays. Maybe there are too many foxes and gulls around to scavenge the corpses before I see them. My best finds of recent years have included a Little Auk and Puffin on Dungeness beach, plus a freshly dead Quail, that lay under the power lines at Dungeness point (it was October 31st 1987, and that is close on 28 years ago, so not so recent after all!) Talking of Dungeness, when the power station first came into being (in the very early 1960s), the observatory and RSPB staff used to walk underneath the power lines, that threaded inland from pylon to pylon, and count the avian fatalities. I'm sure that the figures must survive somewhere. No doubt every other bird was a Corncrake or Stone Curlew...
at September 10, 2015

Email ThisBlogThis!Share to TwitterShare to FacebookShare to Pinterest
Labels: birds

Well I guess we all have these strange ideas. Mine when I was around 12 years old, was going out into the countryside armed with plaster of paris, cardboard toilet roll holders and a bottle of water. When I found an interesting bird's foot print in some mud I would mix up some plaster of paris, put the tube over the print and drop some mixture down it and when it had set I had a round object with a bird's footprint on the top which I would take home and paint after identifying the footprint from my library book of bird and animal prints.

Steve,
I used to keep a list of species that were found dead on Ashes lane ( on my patch) it got a bit depressing, so i stopped at 14! Best (Worst!!) finds, Sparrowhawk, Linnet, Treecreeper, and Goldcrest :-(

I used to have a collection of bird wings and feet as well as a few skulls from dead birds found while out birding. I also had a pair of pet Greenfinches as well. When they copped it, their wings and feet joined the rest!

I'm not the only oddball out there then, even if we are only admitting to doing such things in our youth!

I too went through a phase of collecting corpses in my youth (Kingfisher and Curlew were my favourites) but never in the numbers you found Steve; did you ever consider a career at Tring Museum!

Or even as a taxidermist Steve

THe sparrowhawks round here are busy, judging by the numbers of pigeons I'm finding out and about. As well as cats.