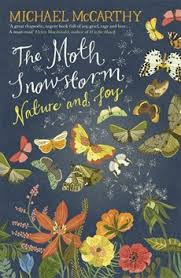 A strange, but affecting mix of autobiography; an exploration of the joy and wonders to be found in the natural world; illustrations of man's relentless trashing of the planet; and the author's hope for how the worst can be averted by a mass-embracing of the hard-wired connectivity that homo sapiens have for wildness and wilderness.

Michael McCarthy is an environmental journalist who grew up on the Wirral and had his first 'road to Damascus' moment with a buddlieja bush that was covered in butterflies. A troubled childhood was further soothed by his discovering of the wild, open places of the Dee estuary.

The author explores how the human connection to natural history has been largely buried in recent times, but explains how this connectivity is still strong, being forged over the 50,000 generations before homo sapiens became farmers of the land. The title of the book is taken from one example of the recent loss of biomass - that of the thinning of the volume of moths in flight that used to be picked up in car headlights during night-time journeys along country lanes. If you were born after 1965 you may not have seen such a sight. This 'thinning' - of our moths, butterflies, birds and flowers in particular - is firmly put down to 'Farmer Giles' through the political machinations of subsidy, grubbing out of hedge and copse and the use of chemicals on the land.

There are harrowing accounts of the destruction of far eastern estuaries, through vanity projects at the cost of the welfare of vast numbers of wading birds. The fall of the House Sparrow is also discussed, with some revelations as to the probable reasons behind its decline. This could have been a book of sadness, but the examples of joy (and wonder) are ultimately victorious. These range from the winter solstice, the first butterfly of the year, the first snowdrop to flower, blossom, colour, form... there are examples aplenty, with the author's awe and thanksgiving writ large.

As someone that, as I get older, can appreciate the sheer wonder of the natural world ever more strongly, this book captured my mood. We all have our personal reasons for being touched by what we see, or smell, or hear, and it is affirmative when somebody else expresses such joy at them - you are not alone!
at September 27, 2015

Steve, I will put it on my Christmas wish list - perhaps the grandchildren might oblige? It sounds right up my street.
That finished painting looks "the dog's!" All the best - Dyl

Thanks Dyl. I reckon that you'd find a lot in the book that would resonate with you. Drop enough hints and Father Christmas might oblige!

I read that book a couple of months ago, a very good read it was too, backing up my dislike of many of the large farm holdings and landowners, as well as the agri-chemical industries.

Hi Warren, you're correct, there are passages in this book that can get the blood boiling. Big business cares not one hoot for the future.

Have just ordered it and will report back on my opinions when I've read it.

I look forward to the 'Faulkner Thoughts'...

I enjoyed your review Steve. For me too, this book resonated with personal joys and concerns although, after finishing, it did take a number of weeks for me to stop looking at the natural world through a lens of catastrophe. For some time afterwards, all I could see were the losses and destruction.... everywhere. Thankfully, equilibrium did return and it is an important book, beautifully written, with an unsettling and timely message: we must look after what we have left of the natural world!

Lucy, funnily enough I felt the opposite and had swept the negative stuff under the carpet! Funny how we can both read the same book and be immediately affected in different ways.

Two interesting and differing comments there, I look forward to seeing if I come close to either once I have read it.