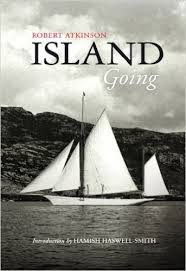 Why are books like this not written any more?

In the summer of 1935, two students from Oxford, Robert Atkinson and John Ainslie, set off to visit Handa Island. Their main aim was to find the nesting Leach's Petrels. And so began what was to turn out to be a 12-year love affair with the west coast Scottish islands, their birds and the people who eked a living out of these rocky outcrops.

The book recalls in great detail their summer travels, ultimately taking in North Rona, The Shiants, Canna, the Flannans, Eigg, North Uist, the Monarchs, St. Kilda and Sula Sgeir (todays birders will be familiar with the latter as the rocky outcrop that hosted a Black-browed Albertross between 2005-07).

I have not visited any of these places, but so vivid is Atkinson's writing that I feel as if I know each one on an intimate level. These two young men suffered for their studies, cadging lifts on working boats, being abandoned for days on end to squat in ruined bothies, living off meagre rations, getting very wet, filthy dirty, scratched and bitten. But, unlike us modern day softies, the harder the conditions were, the more they revelled in them.

Some of the events of this book are now 80 years old, so it is quite charming to read how they planned their first trip by writing letters to seemingly random people in Scotland to find out how they could get to Handa; digging up petrel nests to take a look and see what was going on; the almost Heath Robinson scientific experiments; the selective eating of a few seabird nestlings; sharing accommodation with fearless Black Rats on the Shiants; playing golf on a homemade course with the lighthouse keepers of the Flannans. The book is full of terrific anecdotes.

The human history behind each island is explored, contemporary accounts being taken with a pinch of salt at times when being compared with the historical record. In fact, in several cases there seemed to be just an oral history to refer to - these really were bygone times. And of course the wildlife is brought to life via the author's refreshingly open-eyed wonder.

I'd not heard about this book until it was handed to me by my literary-recommender supreme, Pete Burness. For that I'm eternally grateful. First published in 1949, my copy is by Birlinn (2008) and is available on Amazon. Pick up a copy and start planning your own expeditions to these magical places. Highly recommended.
Island Going Robert Atkinson Scotland