Up in Shetland, Jon Dunn has put together his 'Desert Island Books' list. Now, I do like a good list, and there isn't enough of this sort of stuff in blogland - and I am not above pinching someone else's idea. So here is my version (with a nod to Jon...)

The rules dictate that I am allowed but eight choices. Impossible! How can I possibly whittle my favourites down to a mere eight books? This is calling for some hard choices to be made. My first decision is to keep this list solely populated by natural history or travel-themed works. This will make the task ahead a little easier - a little being the operative word, as it is still very difficult. I am also of a mind to remove any field guide or reference work, leaving publications that have a bit more of a personal slant to them, whether that comes from the author or some connection that I have made with the book. This will bring the list of choices down to a mere 40 or 50. But I need to be brave, be cruel to be kind, and start slashing.

And so, in no particular order...

Regular readers of this blog will not be surprised to see Seventy Years of Birdwatching by HG Alexander appearing. If there were need for me to burn every book in the world, bar one title, then this is the survivor. Why? Because when I started birdwatching back in 1974, I visited Sutton Library to see what bird books they possessed. I borrowed two titles - 'Where to Watch Birds' by John Gooders and this one. I read it from cover to cover in a single day and then started on it again. It became the template of how I bird-watched for many years. Even now, 42 years after first picking it up, I get goosebumps when I see it on the book shelf. I take it down and open it with a reverence normally reserved for ancient manuscripts. The book is the modest autobiography of Horace Alexander, born in Surrey in 1889 into a family that had a keen interest in natural history. Together with his brothers they combed the Surrey, Sussex and Kent countryside either side of the Great War. They were avid notetakers, keeping records of almost everything they came across.  It was this part of the book that captivated me, and I was soon copying the ways of HGA. He also devotes a chapter to Dungeness, a place that held a strong affection for him - I would soon follow in these particular footsteps. He went on to be a founding member of the West Midlands Bird Club, become active in Indian Ornithology and lived to see his 100th birthday. But it was his early, modest days that enthralled me. I cannot recommend this book highly enough.

I don't know what made me buy Blood Knots by Luke Jennings. I liked the cover, was intrigued by the summary on the back cover, but I'm no fisherman. I'm very glad that I did. This is a book that has many layers, each one as rich and satisfying as the other. His childhood in Sussex was driven by a need to catch and understand fish, but for Luke the manner in which this sport was conducted was one of respect, wonder and mystical powers. He read avidly, and was fortunate to be 'adopted' by a number of angling mentors, none more inspirational (and tragic) that Robert Nairac, an older pupil at his boarding school who in later life was murdered by the IRA in his role as an undercover Army Officer. It is as much about right of passage and an exploration of honour and friendship as it is the ways of the angler, it explores the premise that, after we have immersed ourselves in a subject, it is the way in which we go about obtaining our results that ultimately counts and brings us to a purity in the pursuit. From silent hidden pools, to trout streams, to dark London canals, this book will have you hooked (oops, bad pun). A number of my fellow bloggers have read this book on my recommendation and none have been disappointed. It is a haunting read. I still think about its content, the characters who we meet and the life affirming messages that subtly bleed from the pages. 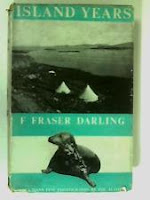 I was fortunate enough to befriend a grand old lady who was in her late 90s. We used to talk about all manner of things, and our shared love of wildlife was a favourite subject. When she died, she left me a copy of Island Years by F Fraser Darling. She had said that I would like it. She was, as always, right - I was captivated from the very first page. It is the account of Frank Fraser Darling's time on The Summer Isles, off of Scotland's west coast. Together with his wife and young son, they set out to study the wildlife of one of the uninhabited islands. As much about the joys and struggles of such an undertaking as the seals and birds that they come across, this is also a letter from a time when the world was becoming a darker place - the Second World War was in its infancy and although the family are removed from its grasp, the shadows are approaching. It reads like the diary of a fearless explorer, who has chosen a wild rock in the Atlantic Ocean rather than an Amazonian rainforest or an Arabian Desert. Hardships are taken in their stride, be they winds wrecking their shelter, food shortages, bouts of illness or the worry of a young boy being exposed to an imposed way of life that most lads of similar age would find intolerable. It made me want to give it all up, throw caution to the wind and find an uninhabited island. Needless to say, I'm still here in so-called civilisation.

It takes something for a book that was only published last year to make it onto an all-time list, as it hasn't really had time to settle into the mind and become a part of your history - but In Pursuit of Butterflies by Matthew Oates manages this with ease. It shouldn't work. We are taken on a highly detailed journey through the authors life with butterflies from his early schoolboy years up until 2013. That is 50 years of it! With most authors, such a dense release of data would pall after a few chapters, but Mr Oates just oozes joy, celebrates all things butterfly and take us, hand-in-hand through the special places where these marvellous insects exist. We get to know certain species with an intimacy that can only be gained by exhaustive observation, but this is a labour of love and you cannot but help to become overwhelmed by the love as well. He has his favourites, none more so than the Purple Emperor. You find yourself willing him to come across his Holy Grail, the aberration iole. As we are taken through the years we get to experience every boom, bust, drought, success and failure with a liberal sprinkling of folklore and poetry. This book has made me want to seek out a 'Black Admiral' and I lust after a valezina Silver-washed Fritillary. You will never look at a butterfly (or it's habitat) in the same way again after reading this book. After finishing it I went into local woods and realised that I had been looking in the wrong places for Purple Emperors. The book tells you all that you will need to know about the subject and help make any future time in the field more informed and most probably successful. I cannot wait to re-read it.

Marvellous stuff, Steve! I am two-thirds through 'In Pursuit of Butterflies' and don't want it to end. And as you know I am a great fan of 'Seventy Years of Birdwatching'... 'Island Years' though is new to me - and I can't wait to get hold of a copy!

This is one of the delights of this Desert Island Books thing - stumbling across some new gems. Thanks so much for this.

It ought to be compulsory for all natural history bloggers to join in!

Thanks for those Derek. Some I don't know, so will look them up.

I was working on the diversity principle, a load of, same theme, UK natural history books on a desert island would not only be limited for relieving boredom but also wouldn't help you identify the local fauna anyway.

I'll get onto the case straight away - it is a fantastic concept!

I haven't read 'Seventy Years of Birdwatching' for years but to my delight I found a copy in my Mum's bookcase (but minus the dust jacket). Forgotten what a great read it is.

Re-live the pleasure Paul - always worth another read!

I know North Rona very well. Visited many timed with the expedition ships I used to work on. I'm not given to notions of mystical fancy but there is something going on in Rona. It remains, of all the incredible and beautiful places I have visited, by far the most important to me.