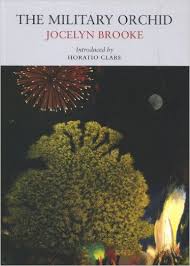 I am currently reading The Military Orchid by Jocelyn Brook. It is a delight. Little Toller (those fine publishers of sensitive and worthy nature writing) have reprinted it, so it is easy to get hold of. I was lucky enough to be given a copy of his collected works, referred to as The Orchid Trilogy, by my good Dungeness buddy, Pete Burness.

Brooke grew up in Kent in the early 20th century, living on the coast just west of Folkestone. He was a precocious boy, and took to the study of wild flowers readily, although by his own admission, he was really interested in orchids.

The book reads as a highly chatty field notebook, written with a flowing ease that makes this book a delight to spend time with. That the places and species that he mentions are well-known to me only adds to the experience. I'm not far into the books, but such is the joy I thought it only right to suggest that visitors to this blog secure a copy.  Brooke was obviously a complicated individual, finding social situations difficult, and I believe that the later books (they are all based on his life) reveal that his sexual orientation was out of kilter with what was seen as acceptable at the time. Another book that makes me very aware that there are so many others out there that I will never be exposed to but for the recommendation of friends. Thanks Pete!
at March 22, 2016

Only pulling your leg about tomorrows post. Steve.
It was good. Really. Matters more than you think.
That drive to do all sorts, is what I miss most now I've 'dulled'.
I tried to do a blog myself. Can't. I haven't the mental energy required.
I am;compared to yourself, deficient.

Hi Ric, that post was pathetic and I knew it at the time. It needed to be pulled and the whole incident gave me a well-timed kick up the arse! As for blogging, at times it can become a self-indulgent, self-serving thing. My aim is to try and limit such use!

How strange - I'm reading 'The Military Orchid' too at the moment, Steve. I must send you an email - my quest is off to a flyer. Am starting to make more concrete plans for May...