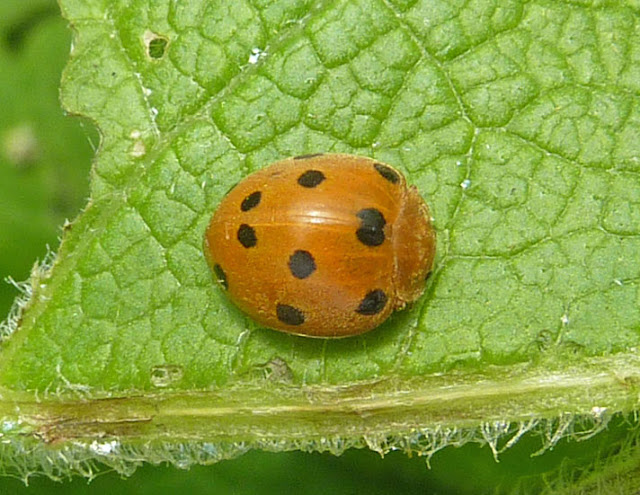 The Bryony Ladybird (Henosepilachna argus) was not recorded in the UK until 1997, when a five-year-old girl found a 'strange' ladybird in a north-west Surrey garden, and kept it for her grandfather to look at (who had a keen interest in such things). Once the identification had been established, and the 'beetle jungle drums' were sounded, field workers were then on the look out - and within a year two large colonies had been discovered. The north-west corner of Surrey has remained a happy hunting ground for those seeking out this insect, and since then it has spread ever so slowly from there, with the furthest specimen recorded away from this core being in Oxfordshire.

I do not go out of my way looking for such things, but I have now stumbled across the Bryony Ladybird on three separate occasions, all from 'my' bit of Surrey - 2012 (Bockett's Farm, Bookham), 2014 (Chipstead Bottom) and 2016 (yesterday, pictured above, Langley Vale Farm). Each time the ladybird concerned has been resting conspicuously on the top of a leaf, my attention being drawn to the distinctive browny-red colouring, most unlike the blood or pillar-box red of some of the other species. If I can stumble across three, just like that, then you can rest assured that there are plenty out there. Keep an eye out for it and extend the species known range!
Bryony Ladybird

Unknown said…
Just found them on my allotment in Dartford - three of them on the bryony climbing the boundary fence Richard
11 May 2017 at 07:06

acclivity said…
I just made the first record of this Ladybird for Sussex yesterday, 9-June-2021. 200 metres from the sea at Hope Gap, Seaford Head. Confirmed by the Sussex Beetle Recorder.
10 June 2021 at 14:44