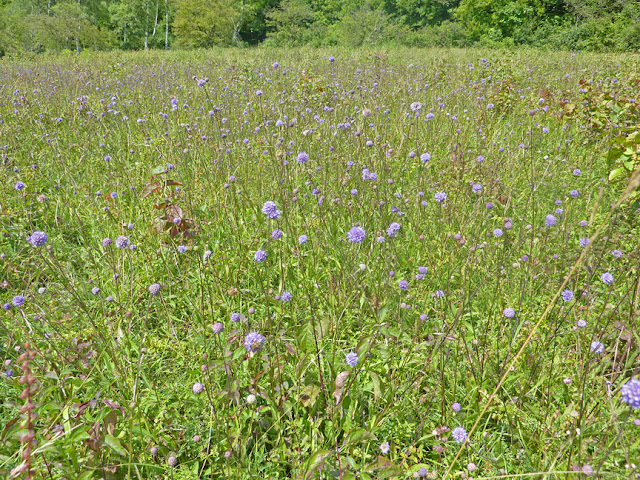 It's been a clear three months since I've birded at Canons Farm. Lured out by the (imagined) promise of passerine migrants, I toiled under a hot sun for close to six hours, and was scantly rewarded with a Wheatear, a Willow Warbler and low level counts of Chiffchaffs, Blackcaps, Whitethroats and Swallows. Just as well I don't wear 'birding blinkers'...

Butterflies to the rescue? Well, yes and no. Numbers were pants. However, two Clouded Yellows (Reeds Rest Bottom and Fames Rough) were a delight, especially as these were fully coloured-up individuals, unlike my previous two records from here, which were both of the pale helice form. A briefly showy Brown Hairstreak presented itself along a hedgerow by Woodpecker Meadow, and a tatty Silver-washed Fritillary was just about flying at Fames Rough. None of those to be sniffed at.

Botanical highlight was, without doubt, a mass-flowering of Devil's-bit Scabious. The whole of Sheep Brow seems to be covered in literally hundreds of thousands of plants. The area is currently cordoned off (due to livestock issues) but they can easily be seen and photographed from the 'correct' side of the fence. The top photograph hopefully gives you a flavour of what it was like, although if access is allowed in the next week or two I will try and get back for a proper photo opportunity. A single flower head (below) is as much a thing of beauty. 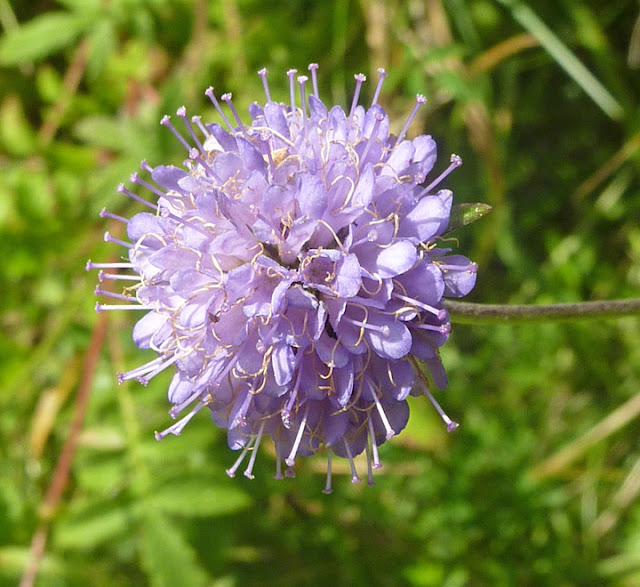 Do you see many in your area Simon?