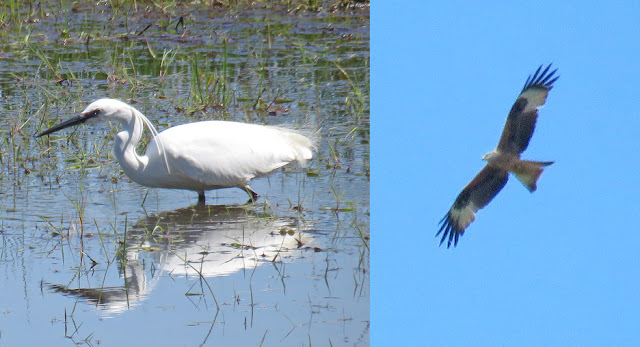 I needed a change of scene - all of this dry inland patch bashing might be terribly worthy, but it's a hard slog. But, being obstinate, instead of rushing to a coastal hotspot I ambled down to the most coastal of inland sites - Pulborough Brooks. During a wet winter it resembles an inland sea, but today it was largely dry.

The hedgerows and copses that run down the hill from the visitor centre towards the flood plain were alive with warbler song - mainly Blackcaps, Whitethroats and Chiffchaffs, but also 5 Lesser Whitethroat, 3 Willow Warbler and 2 Garden Warbler. A special mention must be made for that Pulborough icon, the Nightingale. Being the middle of the day, they were not at their most vocal, although three birds did deign to have a bit of a sing-song.

Little Egret (6), Common Buzzard (15), Red Kite (2), Hobby (2), Lapwing (30), Redshank, Cuckoo, Sedge Warbler and Raven were additional highlights. A visit to this RSPB reserve is never a chore, always a pleasure, and the cafe sells some of the best home made cakes money can buy.
at May 02, 2017

I was in Surrey again weekend and had a new lifer - a Wood Lark.

You almost qualify as a Surrey resident Derek!