Call myself a birder?

August 02, 2017
I thought I knew a bit about the birds in my immediate area - let's say within a three mile radius of home. There wouldn't be much that would get past me, at least as far as big obvious birds like Barn Owls were concerned. WRONG! I have just become aware that a pair of Barn Owls have successfully bred not 500m from my front door - not just this year but last year as well. My fraudulent claim to be some sort of 'local expert' has been shown up for the sham that it is. Let me give you a bit more detail...

Katrina was speaking to a couple of her friends two days ago. Both of their husbands have plots on a local allotment, and the conversation turned to the nature present at the site, specifically the owls that breed there. Knowing that I'd be interested, Katrina asked what species of owl was present. When she later told me that, apparently, they were Barn Owls, I was terribly dismissive. "Oh no, they won't be Barn Owls, they wouldn't breed on a small allotment surrounded by housing." To give you an idea of the allotment's position in relation to buildings, here's an aerial image with the allotment marked by the yellow spot. 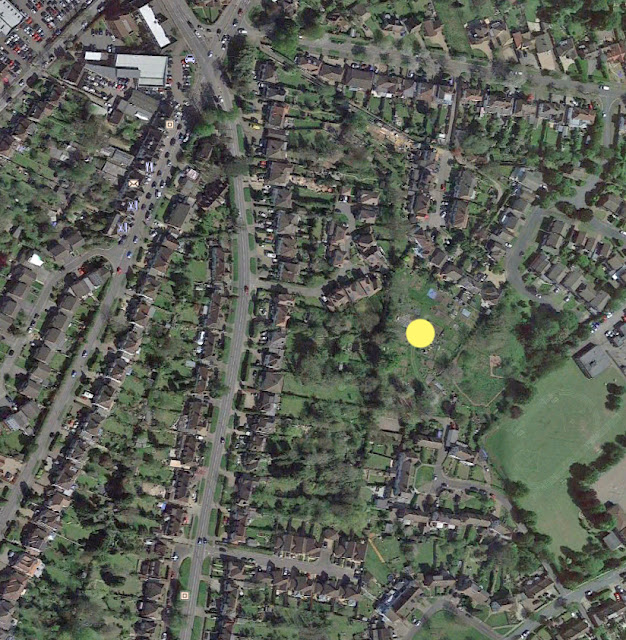 They'd be Tawny Owls, I confidently claimed, or possibly Little Owls at a push. However, my wife's friends seemed adamant that they knew their owls, had seen them well and often sat and watched them, especially now that there were three young birds that sat in trees close to the nest box and called - a hissing - waiting for the parents to return with food. Hmmm... they hissed... sounded like Barn Owls, but surely not.

Last night we went and looked.

At 21.30hrs we arrived at the allotments in the company of Flip and Gill, settled down and waited. Within a minute an adult Barn Owl flew from the area where the nest box is situated and was lost from view. Within five minutes the hoarse hissing started, and carried on for most of the hour that we were present. At least three 'hissers' were involved. We had a number of fleeting glimpses of the birds moving between the trees, with another fly-by by an adult. I was stunned.

The choice of the allotments as a nest site baffles me. The closest open ground is a school playing field, next to the allotments, but the nearest sizeable open areas are 300-400m to the north-west. Any hunting forays necessitates a fair flight through or over fairly dense housing. The area is blessed with plenty of grass verges, sizeable gardens, trees and 'wild corners', so do the owls hunt along the streets and through the gardens as well as the larger, more typical habitats nearby? Obviously, I've not seen them doing so.

The natural world is full of surprises. We never know it all - at least I don't.

Arjun Dutta said…
To be honest that has just made me feel amazed and aggrieved at the same time.
I live nearby and I got my first ever Barn Owl by going down to Dungeness, after trying in Wales and Suffolk desperately to find one!
Thank you for telling us anyhow! Is there a way of viewing them at all?
Arjun

Steve Gale said…
Unfortunately Arjun the site is private, and I could only visit as I was invited to see them. However, the young will soon leave, and I am hoping that they may take up some of the nearby available open ground. If they do I will let you know.
2 August 2017 at 17:58

Steve Gale said…
I don't know if they've been seen there for a number of years now Seth - but then again, how would I know if they were still present!!
3 August 2017 at 14:47

Phil Slade said…
Sounds like your owls have also learned to be discrete. Around here Barn Owls nest in buildings only!
4 August 2017 at 17:34

Chris Janman said…
Judging by the number of rats around our lane this year, they seem to be having a great year, plenty of food for Barn Owls. I was watching from my bedroom window on Friday at five young rats under my feeder, when the local Sparrowhawk wizzed in and took one, round of applause, please come again !
6 August 2017 at 21:12

Steve Gale said…
Funnily enough Chris, I don't mind bats, spiders, snakes, big insects - I'll happily pick any of them up - but rats!!!! They freak me out. I would have bought that Sparrowhawk a pint!
7 August 2017 at 18:35