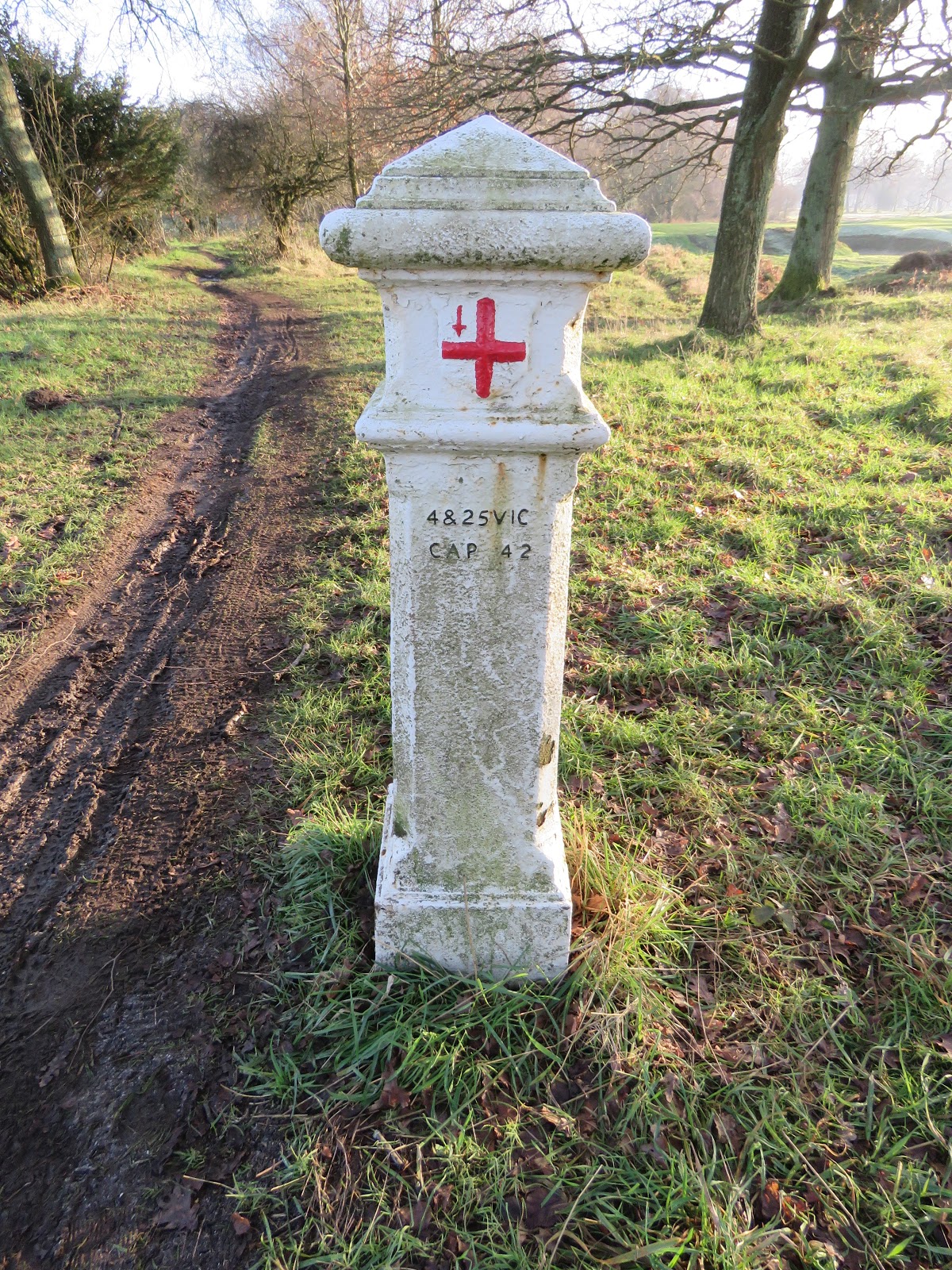 They are coal tax boundary markers.

Coal imported into the City of London had been taxed since medieval times and, as it was originally all brought by sea to riverside wharfs, the collection of the duties was relatively easy. By the 19th century however, there was increasing trade by canal and rail, and various Acts of Parliament extended the catchment area to include these new modes of transport. In 1845 the boundary was set at a radius of 20 miles from the General Post Office, London. In 1851 an Act permitted the erection of boundary markers to indicate where this boundary lay; and about fifty markers were erected. In 1861 a further Act was passed, reducing the area to that of the Metropolitan Police District plus the City of London. New marker posts (about 280) were erected to show the boundary within which the duty was payable. The purpose of the posts was to give notice of where the boundary ran so that no-one could claim ignorance of liability to pay the duties.

The photograph above was taken on Walton Heath, one of the 1861 alumni. These markers of the past resonate with me, just as much as an ancient tree, a well-established footpath or old farm building. Where we walk, so have many before us. These posts are now standing proud - and maintained - in odd places. I can find them in the middle of a copse or alongside the edge of a minor footpath. Like the Second World War pill-boxes, that are strewn across the scarp slope of the North Downs, their positioning at the time made sense - but today, not so much. Time moves on, the vegetation matures, our need of a particular footpath wanes. But the solid post or pill-box remains rooted to the ground, ignorant of the passing of time.

Imagine that route in 1861. How many flowers, birds and butterflies will there have been...

Hi Steve, I`ve come across these `coal posts` in woods north of the capital, and mentioned them in an article I wrote a while back on Wormley Wood in Hertfordshire: "Of particular historical interest in the wood is an old Coal Post that dates back to the 1860`s and marks the boundary from where the Corporation of London charged duty on incoming loads of coal entering the capital. It is one of 250 such posts scattered around the outskirts of London." I`ve come across others in what was the ancient, now fragmented, Epping Forest that once straddled much of Herts and Essex, and also in Bricket Wood, Watford. Quiet often coal posts are found alongside man-made dew ponds, used for drinking by the draught animals hauling the coal. Amazing what you come across when out birding, fascinating stuff. Cheers, Paul.

Well, if we haven't got birds to watch Paul, we can always seek out coal posts!!