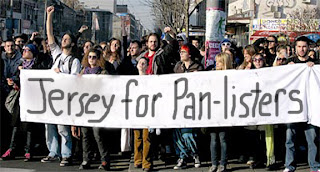 I was pleased to see that naturalists from all over the UK gathered at St.Helier on the Channel Island of Jersey to protest against Mark Telfer's cruel discrimination against the islands as not being considered a part of the pan-listing kingdom.

John Nettles, old Bergerac himself, gave an impassioned speach to the crowd of several thousand Frenchman in which he pointed out the absurdities of allowing entry for the Isle of Man "their cat's haven't even got tails!" and the Republic of Ireland "it's only allowed in because he's seen White Prominent there!"

Monique Le Seur, of Monmartre Chateau on the Rue de la Tete commented that Jersey "is as English as I am".

Among those signing the petition being gathered were Bill Oddie, Kate Humble, Terry Nutkins and that bald bloke from the One Show. It was left to John Nettles to some up the mood of the demonstration - "If Telfer thinks that he can get away with this, he's got another thing coming. I'll hide his bloody hand-lens and that'll sod up his beetle examination for a bit..."
pan-listing

Mark G. Telfer said…
Forwarding this press release:
"After agitation from the North Downs and Abroad and angry scenes on the streets of the Bailiwick of Jersey, there was an emergency meeting held at Pan-species Listing Central last night. A bleary-eyed spokesperson emerged this morning to declare a shock change to The Rules: the Channel Islands count!
Insiders believe this heralds a new era of political and economic unity between the UK and the Bailiwicks, with HM Revenue and Customs anticipating that the islands wealthy inhabitants will be expressing their gratitude through voluntary tax contributions.
Mark Telfer said: “I’m relieved to have averted this schism in the Pan-species Listing community. But it is a symptom of its success now that a massive 10 listers are participating. It is a major responsibility to try to keep everybody happy”.
But celebrations over the news were clouded by rumours that a militant lister is now planning holidays to Gibraltar and the Falkland Islands."
1 June 2011 at 10:45