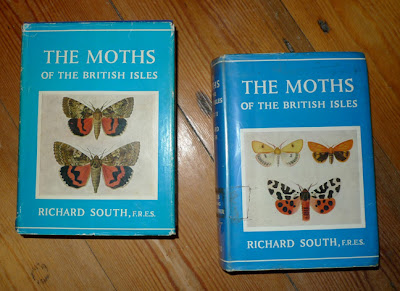 Stewart Sexton's recent rant on the practice of splitting moths into micros and macros has got me thinking (not a bad thing, I know). Splitting them is something that I am guilty of. Stewart is quite right in pointing out that there is no sense behind doing so - they are all moths! It is comparable to splitting a list of birds into passerines and non-passerines.In fact, if we are to be pedantic, a pure list of lepidoptera includes butterflies in the order, being placed between micro moths and macro moths in the systematic list (with a few macro moths appearing before the micros to prove what a debacle the micro/macro split really is).

From my own experience, this division really started when I first took an interest in moths. Apart from The Observer's Book of Moths, the first identification guides I possessed were the two volumes of South's which I obtained in 1981. There were no micros illustrated. Therefore I was not in the best position to tackle them, so ignored them.There was a companion volume for pyralids and plume moths, but I kept away from it.

When Bernard Skinner gave the world his ground breaking book in the mid-1980s a whole new generation of moth-ers were born. Again, no micros were dealt with and this meant that all of the recent converts did not have micros on their radar.

My thoughts are that, if you came into moths from birding in the 1980s (and a lot of us did) you are more likely to have the micro/macro divide. Later converts have been blessed with far more micro literature, plus, more importantly, the internet as a resource. Therefore the chances are that they did not come equiped with 'micro-blinkers' - hence no perceived divide.
at February 27, 2012

Email ThisBlogThis!Share to TwitterShare to FacebookShare to Pinterest
Labels: Moths

Even now Steve, though there is more literature there are still only two books that I have that comprehensively detail all of moths and butterflies together - MBGBI Vol 7 Pt 2 with the life history chart, and the Bradley 2000 Checklist which has no identification text or pictures, just a list of species and numbers. All other works are still either split by micros/macros or for species groups alone.
The only reason I have them as separate lists on my blog link at the moment is that the overall total is too big to manage in one list ;-)

I know the feeling Steve. I dabbled with Moths in the mid 90's with only a chinnery Insect guide for company! I could only id about 25% of what I caught, so rapidly packed it all in.

Now though, there is no excuse for all this separation. I contact an expert such as Skev or Leverton or Tams ( I dot and dab so as not to harass anyone!) with a quick email and I get a decision in a very short time. I still like to have ago first though. I post pics on the blog that I have id'd and get put right within the day.

So, I expect to see your moth list rocket forward in 2012 now that you are looking at the lower numbers that have been previously ignored....

Oh and the new micro guide is out soon too...see even the new book split them Doh!

Skev and Stewart: I think we are the products of how we entered into an interest in moths, plus who our mentors may have been. Funnily enough, I got into them after spending a few days with a very young Sean Clancy at Dungeness. The 'Dungeness moth collective' still openly talk of macros and micros as if they are totally different.