Odds and ends, bits and pieces, this and that

This post is nothing but a round-up of the bits and pieces that are currently in orbit within my head at the moment. So expect the cerebral equivalent of 'carpet sweepings'...

Micro-moth field guide. The latest issue of British Wildlife lets slip that 'The Field Guide to the Micro-moths of Great Britain and Ireland' is coming soon! No publication date as yet, but the wording suggests that it will be soon. The team behind it includes Phil Sterling, Mark Parsons and Richard Lewington. Can't wait!

Pan-species. At the start of the year I swore that I would leave mosses alone. I've been out in the field a few times and have come across luxurious banks of mosses that look so, so inviting. I'm weakening. I actually want to start on them in earnest. I've got the field guide. I've got a hand lens. I've got small plastic bages to collect them in. Watch this space.

Other blogs. I'm going through a bout of blog envy at the moment. It seems to me that most other blogs are better written, have more originality, seem to have cultivated larger and loyal followings, post superior photography and are leaving me standing in the corner with my bottom lip quivering. However, I now realise that even if nobody else glimpsed at my efforts the mere process of getting stuff written and out there is a good process to go through. Keeps the mind working. Acts as a way of sharing with others, beit information or thoughts. I feel as though some of my best friends are other bloggers and I've not even met them! How sad is that!

Listing. After 38 years of keeping lists I have only just realised that I am an avid keeper of lists but a poor chaser of them. This lack of chasing is down to the fact that I cannot possibly compete with those that are full-blown chasers. I'd like to suggest that whereas I am evenly balanced, they are socially inept - but as some of them are big buggers and know where I live I won't share that thought with you.

Blockers. I shared some of my good bird blockers with you a few posts ago. I've just thought of another - the Devonian Hudsonian Godwit of 1981.

Poor digiscoping. This is the Kumlien's Gull from Beddington SF that I saw on Saturday. It's been blown up and sharpened to within an inch of it's life. You will find better on several hundred other blogs. Why have I posted it? Absolutely no idea. 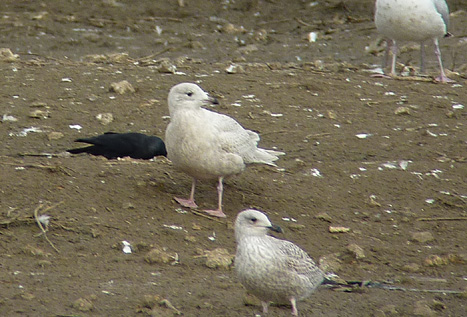 Having stopped and started again twice now, I know what it is to be an addicted blogger. As you say, the writing stuff and getting it out there is a good process to go through, regardless of readership, but knowing you have an appreciative audience is a bonus. Well, you do!

I saw that Hudwit in spring '83, and it's probably my oldest blocker.

Don`t know how you can say you have blogger envy, Steve. No word of a lie, yours is one of the best written & entertaining ones i visit. No dis-respect to all the others though ;-)

Gavin: thank's for the kind words but I still haven't forgotten that you owe me a bag of Giant Buttons.

Dean: I've always thought of you as a man of impeccable taste and shrewd judgement. The cheques in the post...

I was just going to say the same as Dean! Steve, if you wrote a book I'd buy it...Great crack son, keep it up, you leave the rest in the rear view mirror..

Stewart, any more of this niceness and I'll have to compare your illustration to the great Ennion once more. Even hints of Tunnicliffe at times...

Hi Steve, Blog envy is indeed a serious affliction but it can be treated. Just keep taking the templates. However, it seems to me that you manage to generate a fair bit of blog envy in the rest of us - so we would all be very pleased if you would kindly lower your standards and give us all a break,
Allan