My second painting since 1980 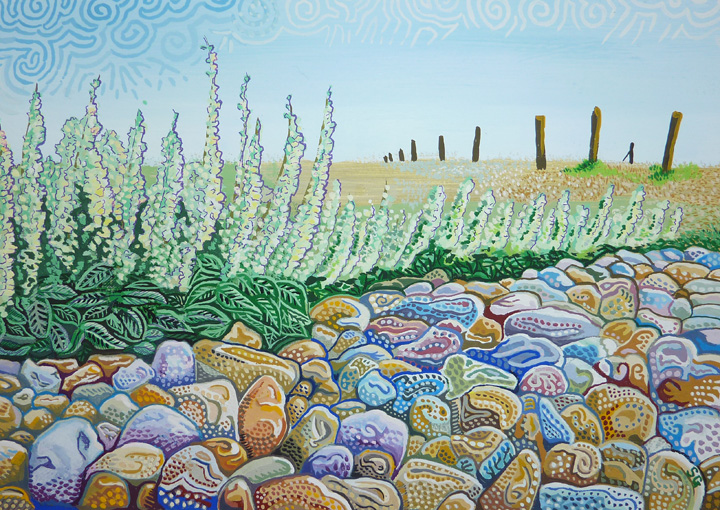 Last April, after producing my first painting since 1980 (which you can see here if you so desire), I thought that I would be bashing them out throughout the year at a prolific rate. I was wrong... it's taken me almost a further year to create the second. My inspiration is once more a mixture of Hockney/Klimt (God, that sounds pretentious) and is based on the shingle beach at Dungeness and the abundant vegetation present (in the painting represented by Wood Sage). The posts in the background mark the line of the old railway track, long-gone but whose ghost still haunts that magical part of Kent.

I admire fine artists who deal in realism, not just because of their immaculate skills but because I just cannot paint like that. My efforts have always been based on graphic shapes and patterns, but it wasn't until I visited the Hockney exhibition at the Royal Academy last spring that I had the confidence to use bold colours (and lots of them). For the first time in my life I can practice such art without fear.
art Dungeness painting

Gordon Hay said…
Hi Steve,
Very vibrant painting there, great use of colours and texture. I look forward to my first visit to Dungerness.

Steve Gale said…
Thank you Andrew and Neil. The aboriginal patterning was not something that I had realised until I was some way into the painting - maybe Klimt's middle name was Goolagong?
2 April 2013 at 13:02

Alastair said…
Steve,
Well I knew it was Dunge' straight off - before I read your blurb. Posts and pebbles (and wood sage), where else could it be? Really like it, but will we have to wait another year for the next?

I missed the Hockney, last year, its a tad of a jaunt from this far north and when we did make it to London it had gone (so we went to see the very impressive Damian Hirst at the tate - just brilliant "in the flesh" - if a bit smelly, A Thousand Years was leaking quite substantially - girls well impressed).

When I worked in Bingley we used to get the train to Hockney's Saltaire gallery quite often. Great for kids seeing real art as so many of the pieces are large and impressive and colourful. Used to take my class with paper and pastels and spread out over the floor. I would have loved to have seen the Bridlington woodlands stuff, next best thing was catching the documentary on telly. Eldest offspring then tried the app on the iPad with some success - our kitchen table is constantly unfit for feeding from due to art stuff all over it.

Looking forward to the next, all the best,

Steve Gale said…
Thanks Alastair, praise indeed coming from a fellow 'Dungeness shingle-basher'. I saw the Bridlington Woods stuff at the Summer Exhibition - I was blown away by it. Sounds as if you have a household full of creativity there! I hope the spring is kind to you.
3 April 2013 at 16:27