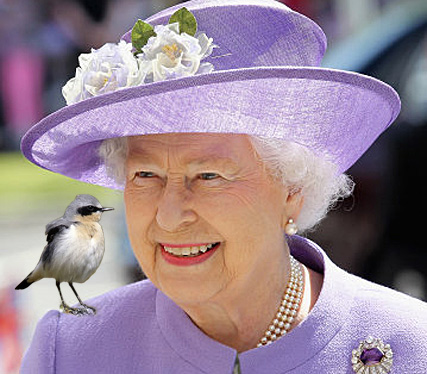 I've decided to embrace the coming 'Wheatearfest' and am proud to bring you  - as far as I'm aware - 2013s first Northern Wheatear image, courtesy of one Prince Philip, Duke of Edinburgh. He took this picture of his wife as she was strolling around the grounds of their London home.

The Prince wrote: "This bird flew towards us, having been prancing about the lawn. Liz said it was a sparrow, but I've never seen a sparrow with such a white arse before. Later, I asked my son Charles to take a look at the photograph I had taken, and he has confidently identified the bird as a female Brambling, which apparently winters in the bottom of lakes."
Prince Philip Queen Wheatear

Jerry said…
Apparently Wheatears are carriers of gastroenteritis
7 March 2013 at 21:54