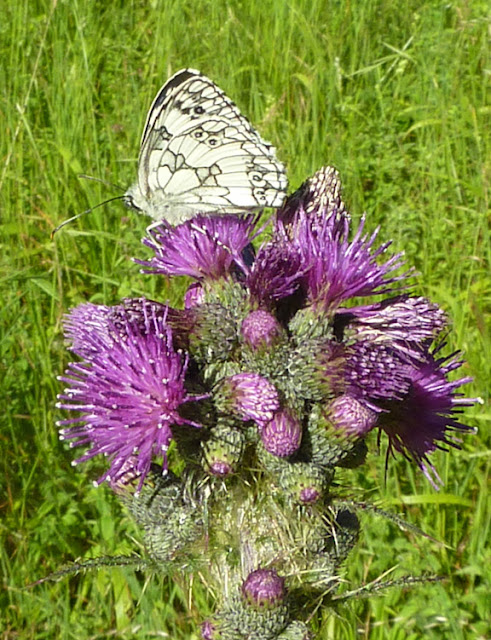 I love counting things - any thing - it doesn't have to be birds, plants, moths or butterflies. It could be books, or albums, or photographs. It is a bit of an illness really, a Tourette's of adding things up. I find myself automatically doing so when driving, having a bath, or, like this morning, out walking...

07.15hrs saw me on Park Downs and not only was it already warm, there were at least three figures of butterflies flying above the flower-rich grassland. These I had to count! A zig-zagging route was embarked upon, with care taken to not recount sections of meadow. My final tally was a bit of a shock as I'd recorded just over 1,000 Marbled Whites. They really were a sight, flitting just above the sward, some spiralling up in combat and then veering off into nearby scrub. They were skittish and didn't settle that easily. Also on the wing were Ringlet, Meadow Brown, Small Skipper, Small Heath and 4 Dark Green Fritillary. It was barely 09.00hrs.

I now had the bit between my teeth, so decided to walk the length of Chipstead Bottom, from Fames Rough in the west to the Holly Lane meadows in the east. It was memorable, as the flower-rich meadows held thousands of butterflies, a constant shimmering presence above the vegetation. This time there were more Meadow Browns (2,270) although the Marbled White count was an impressive 1,760. These are very much conservative counts, the true tallies must be much higher. I didn't ignore the plants, with the Hither Field and Valley Meadows holding a minimum of 3,500 Pyramidal Orchids. The abundance of flower, mainly Cat's-ear, Bird's-foot Trefoil, Yellow-rattle, Rock Rose, Hairy St. John's-wort, Red Clover, White Clover, Wild Thyme and various trefoils was outstanding.

Some people may question the value of putting a number to a species that is clearly impossible to count with pin-point accuracy. However, I feel that this is preferable to purely suggesting that a species is 'abundant' or 'present in hundreds' or 'low thousands'. What does that mean? 300? 500? 2,000? 10,000? At least giving a firm figure allows future naturalists/researchers a baseline. If I repeat the process next year I have something to compare it to - and so do other people. Apart from that, it's fun doing so. What can be better than wandering flower-rich chalk downland surrounded by butterflies?
at June 30, 2015

1000 Marbled Whites ! I would love just one here Steve, be nice if it brought a meadow with it too!!! LoL

Certainly looking like being a top butterfly year Steve, even on the bone dry, grazing fields and sea wall of the Swale NNR we're now getting good numbers of many varieties of butterflies. Peacocks have been very productive with one colony of 700-800 caterpillars now at pupae stage. I trust that you forward your counts to the butterfly people.

Just out of curiosity, what do you count in the bath - the bubbles?

The way they are spreading Warren don't give up hope of a wanderer!

Hi Derek, you shame me as I don't forward butterfly counts as a rule, but will now. What do I count in the bath? That would be telling...

Steve, butterfly numbers such as you recorded are very much needed, have a look at the link below.

I appreciate a count like that Steve, youve had more butterflies this morning than I've had in 20 years here! In the whole county too!!

Stewart, It's a brilliant area for inverts and plants - not so much for birds!

Pyramidal Orchids on Riddlesdown as well. Will try to count number, and specific locations. Yellow-rattle superadundant there (genuinely too much to count). Marbled Whites have made it to the renmant downland of Croham Hurst Golf Club

I'd be interested to hear how many orchids you find there Robert.

Counted three fields this morning. All faced south west on a gentle slope. The first, which is about 200m south west of the Rioddlesdown Road car park held 127 Pyramidal orchids. This filed is relatively recently clearted, the orchids were in the south-east corner.

The second is is just north east of the main Riddlesdown Road (by now gravel), between a gate with noticeboard to the Riddlesdown to Whyteleafe Open Space and a small clump of mature trees. This held at least 1257 Pyramidal Orchid. The third, on the Open Space to the north of the quarry fence held a minimum of 1977.

For all three areas there were significant concentrations; one might almost say the orchids are colonial. Marbled White, Meadown Brown and ?Small? Skipper as well. Plenty of other plants but my botanical knowledge is poor.

All useful data Robert. Pyramidals are clearly having a good year locally.