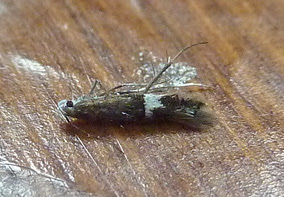 At the moment the UK is experiencing almost unprecedented December temperature, thanks to a plume of warm air that is coming to us from the Canary Islands. It is bringing with it a host of rare migrant moths, which would even be notable in number and composition in high summer. One species that is being recorded in record numbers is the tiny Syncopacma polychromella. And one of them deigned to grace the MV trap here in Banstead (left). This is possibly the second or third for Surrey. Bottle number one: my images were awful. I don't know why, I can normally manage OK record shots, but these were very poor - plus the waif keeled over in the process. It left me feeling sour.

Bottle number two: last night I posted a response to another bloggers item. He was purely venting frustration, built over many years. My rant was pompous and based on never having experienced his set of circumstances. He magnanimously replied to me, calmly explaining his stance. I went to bed feeling troubled and this morning removed the post. Sometimes it's good to bottle. Having an opinion is fine, but if we are to share it with the world - and it's contentious - then be ready for payback, even if the payback is done in a thoroughly considered way. Sometimes it will be heavy and personal. I don't want that.
Moths Syncopacma polychromella

Gavin Haig said…
Lots of reasons why I love your blog, Steve, and this post illustrates several of them. Great stuff.
20 December 2015 at 22:03

Jonathan Lethbridge said…
Steve, I can take it! It's gratifying that you felt bad, but now I feel bad that you felt bad! And we've never even met! Indeed, I've never met many of my favourite bloggers. Your first correspondent on this post, a lady in Belgium, a guy who used to write about some Coots, and a very funny man in Gwent - no idea who any of them are, but I enjoy thinking that I do. Perhaps the reality would be very different, who knows. If I met them away from the blogosphere, would I have the same opinion. Would they?! But you and me, I reckon we're not much different from what we write or how we write it. I know I'm an old moaner sometimes, everybody says so, so it must be true! And now along with your post gone too is my considered reply - typed from my phone in bed last night, struggling with the stupid keyboard, and obliterated by your conscience!
20 December 2015 at 22:42

Steve Gale said…
Jono - Now I'm going to bed tonight, not wrestling with my conscience, but with the image of a man in Essex, sitting up in bed with striped pyjamas, furrowed brow, tapping on a phone.
20 December 2015 at 22:47

Derek Faulkner said…
Steve, due to being an early riser I managed to read the post in question before you removed it and indeed posted a comment agreeing with it. Reading your post at my end it read as a generic comment about a certain faction of birdwatchers, there was no hint of it being aimed at one person in particular and so I was surprised when you removed it.
From my experience at writing opinionated stuff I've always found it best to write and send it in the morning, when you have a clear head and conscience, rather than fret about it overnight. Or of course you can not have opinions and be loved by all of the people all of the time.
21 December 2015 at 05:32

Derek Faulkner said…
Steve, my mistake in the past has been to write and post something after a few glasses of wine, which can be awkward the next day. So I try to stick to my advice above now.
21 December 2015 at 10:20