July 28, 2016
Late July will, for me, forever be linked to the old Beddington Sewage Farm. Back in the mid to late 70s, there were a series of settling beds scattered right across the farm, looking just like this: 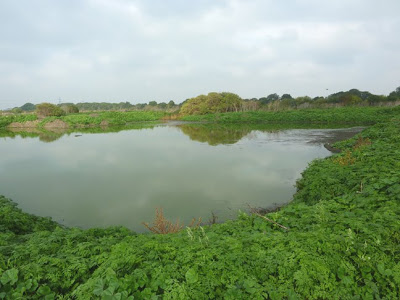 The example above is of one of the larger beds, and many were half, or even a quarter of this size. They all shared the raised banks, wide enough for two birders to walk along side by side, but in late July it was a struggle for even one of us to make headway along them, thanks to the copious amounts of vegetation - back then it was just all green stuff that got in the way, but in later years I realised that it was mainly Hemlock, Goose-grass and Stinging Nettle. The smell, especially on a hot day, was pungent - a mixture of sewage effluent (not as bad as you might think) and rank vegetation. Hemlock, en masse, does have a distinctive, earthy whiff.

Some beds were filled with water, and these at this time of year were not what we sought. We would winkle out those beds that were drying out. Too dry and they were worse for birds than the very wet ones, but to get one that had wet mud, watery channels and even an island or two of vegetation, then bingo! There was a distinct possibility of waders!

Waders were a virtual ornithological currency at Beddington, sought after above all other bird families. From mid-July the first Common and Green Sandpipers would start to appear, and by the month's end they would be joined by Wood Sandpiper, Greenshank, Ruff and Common Snipe (among others). The numbers would also build, so that double-figure counts of some species (particularly Green and Common Sandpipers) would be made.

100 acre, the name given to the northern section of the farm, seemed to always have the best beds. You reached this area by jumping across a concrete culvert by a fallen willow (the border between the two being the evocatively named Cuckoo Lane). I cannot tell you how excited I would get when I ducked under the willow and across onto 100 acre. A steep bank of no more than six foot in height was directly ahead - I would crawl up this, risking stings and goose-grass seed infestation, to peer over the top onto what seemed to always be the best bed. What would be there? How many? If I had succeeded in my stealthy approach, there would be waders feeding without a care in the world. I would settle down and count, always aware that others could be lurking behind an island, or keeping still in vegetation. But to approach noisily, or to break the skyline would send a yelping flock into the air, to circle in protest before settling down on further beds - in which case I still would have another chance.

You could visit three times in a day, and the wader composition would have changed. As time went on, certain good beds would dry out and become less desirable to the waders, but these were replaced by some of the wetter beds that had started to form small islands. It was always annoying to turn up at a series of 'good' beds to find that they had been flooded with effluent and were thus virtually useless for our purposes.

So, there is a part of me in late-July that is forever wandering the old Beddington. It really was a magical place, now lost forever underneath landfill and incinerators. I'm just grateful that I saw it back then.
Beddington Sewage Farm waders

Lee Dingain said…
I birder Beddington quite regularly in the 1980s and I have the same sentiment. So glad I knew it before Viridor destroyed it.
28 July 2016 at 17:43

Lee Dingain said…
I birder Beddington quite regularly in the 1980s and I have the same sentiment. So glad I knew it before Viridor destroyed it.
28 July 2016 at 17:43